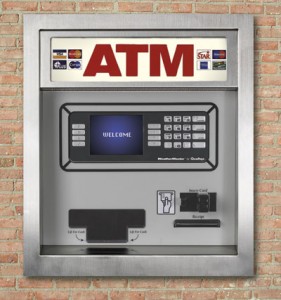 Sometimes you read about a piece of legislation going through Congress and you just want to cheer. That’s the way I felt when I read about Sen. Tom Harkin of Iowa’s proposal to limit the fees when a person uses an ATM from a bank other than their own, something he calls “legal thievery.” Hell yeah, Sen. Tom Harkin of Iowa! Unfortunately, when I continued reading this article in the Omaha World-Herald, I learned that it’s unlikely that the amendment would ever see a vote for a number of reasons, one of which is the fact that some senators have never used and don’t understand ATMs. Well, that’s great.

The article contains some great quotes from Sen. Ben Nelson of Nebraska, who didn’t see the point in the amendment:

“The Nebraska Democrat pleaded ignorance when asked this week whether Congress should cap ATM fees. Nelson said that while he’s no fan of unnecessary fees, he’s unfamiliar with the charges.
‘I’ve never used an ATM, so I don’t know what the fees are,’ Nelson said, adding that he gets his cash from bank tellers, just not automatic ones. ‘It’s true, I don’t know how to use one.
‘But I could learn how to do it just like I’ve . . . I swipe to get my own gas, buy groceries. I know about the holograms.’”

Apparently someone had the same reaction as I did because the article explains how Nelson was forced to explain what on earth he was talking about:

“By ‘holograms,’ Nelson clarified that he meant the bar codes on products read by automatic scanners in the checkout lanes at stores such as Lowe’s and Menard’s.
‘I go and get my own seating assignment on an airplane,’ Nelson said. ‘I mean, I’m not without some skills. I just haven’t had the need to use an ATM.'”

Alright, either Nelson just made the strangest choices of words ever or perhaps he accidentally let slip the ultra secret plans to replace most of the government with high tech Star Wars-style holograms. Just to be on the safe side, I suggest all of our readers repeatedly poke your congressmen next time you see one to make sure they’re actually there.

Either way, that’s your government in action, folks. They don’t get ATMs but they’re totally down with holograms. We can only imagine that any other technology based legislation in the future (like internet privacy) will be absolutely air tight.