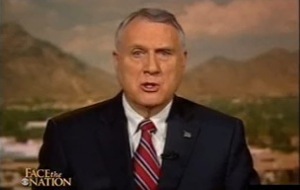 Senator John Kyl (R-AZ) made some news yesterday during an appearance on CBS’ Face The Nation, when he told fill-in Harry Smith that Congress should hold look into denying citizenship to illegal aliens’ children born in the U.S. Kyl claimed that he supported fellow Sen. Lindsey Graham‘s call to introduce a new amendment to repeal the 14th Amendment of the Constitution.

Writing for CBSNews.com, Jimmy So reports:

Support is growing for this stunning reversal from Graham, who in 2007 drew the ire of Republicans when he lobbied for granting legal status to 12 million undocumented workers, and along with President George W. Bush and Sen. John McCain, R-Ariz., led the failed immigration reform effort that would have given illegal immigrants a path to citizenship.

The 14th Amendment was enacted in 1868 to ensure that states would not deny citizenship to former slaves. It reads, “All persons born or naturalized in the United States, and subject to the jurisdiction thereof, are citizens of the United States and of the State wherein they reside.”

“The 14th Amendment [has been] interpreted to provide that if you are born in the United States, you are a citizen no matter what,” Kyl said. “So the question is, if both parents are here illegally, should there be a reward for their illegal behavior?”

With immigration a big issue in the upcoming mid-terms, support for this bill appears to be growing among Republicans, perhaps seeing this as a litmus test in the upcoming elections.