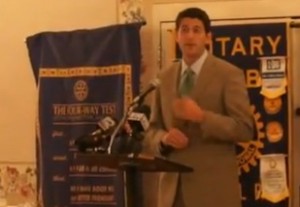 It didn’t take long for newly-minted vice presidential nominee Rep. Paul Ryan (R-WI) to land in the crosshairs of opposition researchers, and it won’t be long before we’re treated to a steady stream of Ryan’s greatest video hits. As Mitt Romney campaigns in senior citizen-heavy Florida today, a 2011 clip of his new running mate mocking a 71 year-old retired plumber who spoke up about Ryan’s Medicare plan should be particularly unhelpful.

Republicans were none too happy when Democrats began running ads featuring a Paul Ryan stand-in pushing grandma off a cliff, but this clip from a Sept. 2011 Ryan event isn’t too far off from that, optics-wise. Following an August recess during which Ryan held no events that were free and open to the public, retired plumber Tom Nielsen joined others in paying to attend a Ryan event in order to protest the budget that ends Medicare as we know it.

Nielsen stood up and shouted questions at Ryan, and was promptly jacked up by police for his trouble. He later explained to HuffPo that his “resisting arrest” was an attempt to guard himself against injury:

“Three people got me and hauled me backwards out the side door and into a little room. … They pushed me the floor and twisted my arms back and handcuffed me. They said I was resisting arrest,” recounted Nielsen in an interview with The Huffington Post.

“I have a broken clavicle from a car accident I had about four weeks ago, and it’s in the process of healing, but it’s not done yet. So I was protecting that. I said, ‘Don’t hurt me! I have a broken shoulder here and collarbone.’ They didn’t pay attention to that. They put the cuffs on really, really tightly.”

While Rep. Ryan can hardly be blamed for the overreaction of the police (although he did nothing to stop it), his glib reaction to the man’s impassioned disruption might not endear him to Florida senior citizens:

“I hope he’s taking his blood pressure medication.” Good one. Here’s another good one. Thanks to Obamacare, he won’t have to eat dog food in order to pay for that medication.

Ryan’s treatment of Tom the Plumber probably plays well with the Republican base, but we’re in a general election now, and the shrinking sliver of undecided voters who will decide this election aren’t likely to be impressed by this, or by a budget plan that even Moon President Newt Gingrich thought was “radical.” At the very least, it demonstrates a sharp contrast between how Republicans and Democrats treat mouthy plumbers.