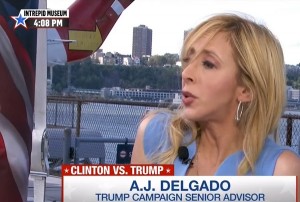 With hours to go before Republican presidential nominee Donald Trump faces off against former Secretary of State Hillary Clinton in an MSNBC “Commander-in-Chief” forum, the Trump campaign has reset expectations beyond all recognition, if Trump campaign Senior Advisor AJ Delgado is any indication. In an interview with Chris Hayes, Delgado indicated that Trump’s foreign policy pronouncements as a “private citizen” should not be held against him, but went a step further than even that incredible standard.

When Hayes tried to press Delgado on Trump’s current policy position on Syria, Delgado told him it would be “unfair to make a judgment call” on that policy until after he’s elected:

Delgado: Well, that remains to be seen once he gets into office and has the information that Hillary would have access to, it’s unfair to make a judgment call at this time.

Trump has previously said that he would deploy 20,000-30,000 troops to Iraq and Syria in order to fight ISIS, or more, if necessary. Or none, maybe. Elect him and find out!

Update: AJ Delgado wasn’t too happy with my headline, and insists she meant that it was unfair for Donald Trump to have taken a position on Syria in the first place. That’s even less sensical than what I thought she meant, but in the interest of fairness, here’s what she said about it on Twitter:

Not what I said, Leftist hacks. https://t.co/5wgORdYf2W

So it's unfair for a candidate to have a position on Syria? That's better?!? lol!! https://t.co/JGciKDPmNk https://t.co/0mOUZJMN8J

So you're saying Trump was unfair when he said that in March? Just to be clear. https://t.co/JGciKDPmNk https://t.co/iWeBZUUwbt

So "Trump Adviser Says Trump Was Wrong to Call For Troops in Syria?" Is that the correction? https://t.co/JGciKDPmNk https://t.co/iWeBZUUwbt

/@tommyxtopher Tommy, "to be clear"? Ironic, Mr. Misquote. Keep harassing conservative women using lies on a blog. Have a good life, bless u

There’s the video, there’s the transcript. I like to think the best in people, so I’m going to continue to believe that AJ was saying the less-nonsensical thing I thought she was saying.