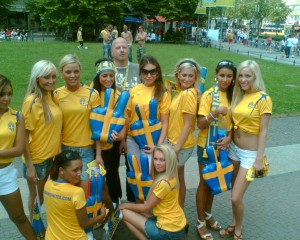 Stunningly, it’s not just the American media that blows up titillating storylines with little news value. Lately, the Chinese media has been fixated on a town in northern Sweden called Chako Paul City whose only inhabitants are 25,000 women, many of whom “have turned to homosexuality ‘because they could not suppress their sexual needs.'” It is almost certainly made up.

The town, supposedly founded in 1820 in the northern Swedish woods by a wealthy widow, boasts 25,000 residents and a medieval castle, according to the Chinese news agency Xinhua.

A pair of blonde female sentries stand guard at the unnamed town, referred to in reports as “Chako Paul City”, and men wishing to enter risk being “beaten half to death” by police.

In addition, many of the town’s female residents turn to homosexuality “because they could not suppress their sexual needs”, the Chinese news service Harbin News reports. The story also formed the basis of a Shanghai Media Group television report.

The news hook, of course, is that … the town has led to a boom in the Swedish tourism industry. From women all around the world who want to sample their hotels and restaurants. This was reported by Xinhua, the official press agency of the People’s Republic of China.

Swedish online news service The Local burst that bubble by, well, actually talking to a Swedish tourism official. He said that tourism was doing well in the north, but he hadn’t heard anything about a hidden town of sexually frustrated women. Somewhere, a foxnews.com editor is very disappointed…

(The Local, via Digg; image from The Offsider Rules)