A man has filed a complaint with the Milwaukee County Sheriff’s Office about his treatment by Sheriff David Clarke Jr. after a flight the two men shared.

Dan Black told local news station WISN that Clarke detained him in an airport when the plane landed due to Black expressing disapproval at Clarke wearing Dallas Cowboys gear. This was on the same day when the Green Bay Packers were playing to Cowboys in a playoff game, which the Packers won 34-31.

According to Black, while they were boarding the flight, he asked Clarke if he was the Milwaukee County Sheriff as he wasn’t wearing his trademarked cowboy hat. (Clarke has become a well-known national figure recently due to his outspoken opposition to Black Lives Matter and support of President-elect Donald Trump.) He then shook his head when Clarke acknowledged who he was. Black stated that Clarke asked him at that point if he had a problem, to which Black said no.

Once they landed, Clarke had several deputies take in Black for questioning and then escort him out of the airport. In response to the complaint, Clarke took to his office’s official Facebook page to deliver a response, indicating that the next time Black or someone else does something like this could lead to a physical confrontation. 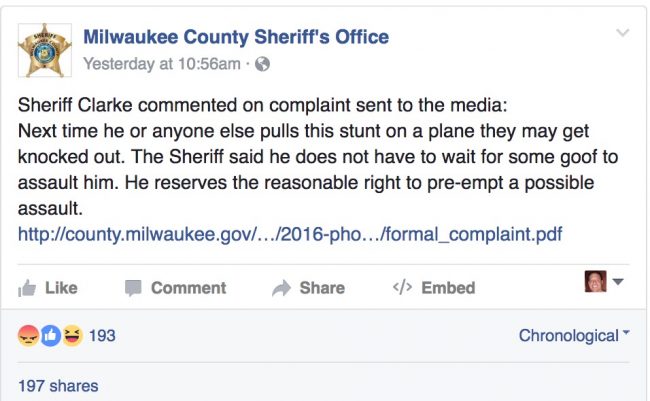 A county spokesperson said that the complaint filed by Black will be forwarded to the ethics board for review.

Recently, Clarke and liberal political commentator Marc Lamont Hill got into a war of words which included the flinging of racial slurs.

Watch the news clip above, via WISN.