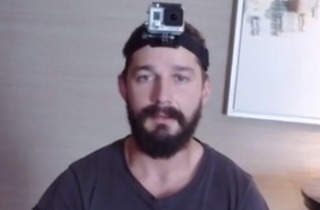 Shia LaBeouf has had an odd year. He was caught plagiarizing and apologized by plagiarizing again. He appeared in public with a paper bag over his head reading “I AM NOT FAMOUS ANYMORE.” He put together a weird “I Am Sorry” LA gallery event. Oh, and he was arrested at a Cabaret performance for being loud and disorderly (there’s also a part involving LaBeouf chasing a homeless man).

And now, he’s done an interview in which he said nothing for an entire hour. But neither did his interviewer, so it’s not completely weird.

Dazed journalist Aimee Cliff explains that she had been corresponding with LaBeouf for a while and they shared some deep philosophical ideas together. When they met in public, Cliff says, LaBeouf had suggested “we keep all of our words online, and meet in person without speaking.”

She did, however, share a lot of the words they exchanged online, including this disturbing allegation LaBeouf makes about a woman who came to his gallery event:

One woman who came with her boyfriend, who was outside the door when this happened, whipped my legs for ten minutes and then stripped my clothing and proceeded to rape me… There were hundreds of people in line when she walked out with dishevelled hair and smudged lipstick. It was no good, not just for me but her man as well.

If you’re bored and have time to spare, you can watch the full, hour-long, completely silent interview here:

INTERVIEW from Rönkkö / Turner on Vimeo.