Should Obama Be Worried? Rush Limbaugh Asks Listeners To Push Back On HCR

Should Obama Be Worried? Rush Limbaugh Asks Listeners To Push Back On HCR 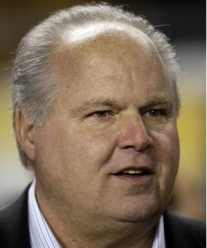 Rush Limbaugh is putting his mouthpiece where his mouth is, so to speak. In an almost unheard of move (it’s apparently only happened once before) Rush Limbaugh announced the Capitol switchboard number on air and encouraged his listeners to call their local representatives and push back against health care. Rush Limbaugh, many of you probably already know, has the largest radio audience in the country. Needless to say the lines were apparently jammed.

But it gets more interesting. Politico’s Michael Calderone contacted Rush to find out why Limbaugh was suddenly using his show to so directly advocate his listeners. The result being that Rush answered him on air, but not before — and I sort of love this — warning Calderone that he’d be losing his “exclusivity” if Limbaugh responded on his show. Calderone was okay with it. From Rush:

“This is ball game. This is ball game, and Michael, the only reason we’re at this point is because the American people have stood up. The Republicans don’t have the votes to stop this. And the Martians don’t have the votes to stop this. Republicans may as well be Martians on this given their influence. All we can do is continue to have the American people let it be known they want no part of this — the substance of the bill or the process. They don’t like it. And that’s why I am urging — because this is a transformation of our country into something that no one has ever seen it be like. And we don’t want that transformation to take place. We like America as it was founded. We don’t want to turn it into a third world country.”

It’ll be interesting to see whether there’s any ‘Rush effect,’ as it were. The pols who could ostensibly feel the ‘effect’ of this sort of thing would be the Dems in swing districts, and I’m not sure how many of Rush’s listeners fall into that category (maybe a lot?). Also, just to be a bit of a devil’s advocate here, it frequently falls into the government’s hands to pass laws that are not popular, or that the country may not be ready for yet. Just saying. Regardless, this is going to be close.