Should You Get an IUD? A Post-Election Spike in Searches For the Birth Control Says You Should

A number of essays and pieces have popped up across the Internet in the past few days that urge women and individuals with uteruses to look into getting long-acting reversible contraceptives (LARCs). Specifically, the pieces have advocated for intrauterine devices (IUDs). 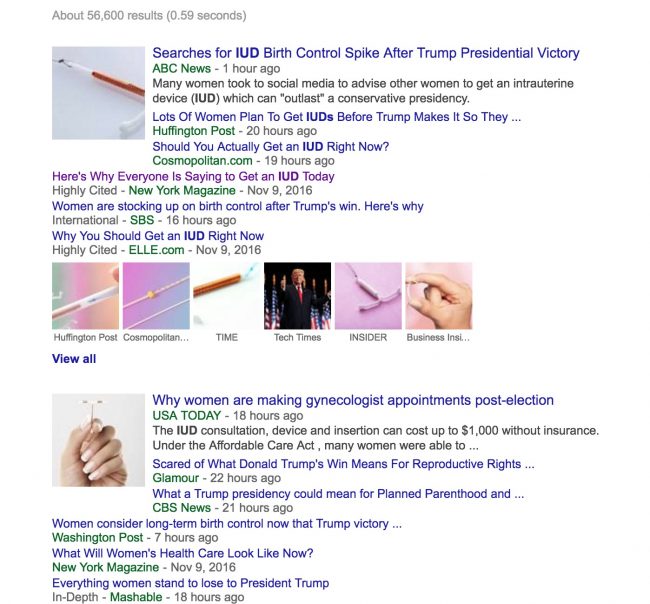 ABC is reporting that the spike in searches for long-acting birth control is directly related to the election we had on Tuesday. But why?

There are a few reasons. The first is that under a Donald Trump presidency, the birth control mandate of the Affordable Care Act could get the ax. Depending on which IUD a person selects, pregnancy protection can last from three to 14 years, which is almost a full presidency in some cases and long enough to outlast three terms in others. While it is still economically feasible and before it becomes harder to get ahold of, people are researching their options. Even if birth control access becomes scarce under Trump and Mike Pence, once the IUD is inserted in the cervix, it’s staying there and doing its job.

You can see why longer-lasting birth control methods are piquing the interest of just about everyone who could get pregnant in the next four years but doesn’t want to. In fact, a desire not to bring a kid into the world when Trump and Pence are in charge is also a leading factor in the spike in interest.

I also set up an appointment with my doctor to discuss an IUD. Ain’t no way I’m tryna bring a kid into this world.

If you have questions about LARCs, there are resources available. Bedsider is a birth control “support network” that has information on every available form, for instance.