So, Here’s Why Everyone Has Been Talking About Mulan Since Pence Won the Veepstakes

So, Here’s Why Everyone Has Been Talking About Mulan Since Pence Won the Veepstakes 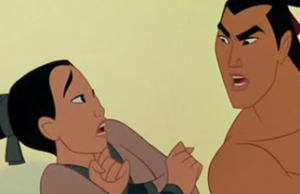 Over the last few days, the word “Mulan” has been flying down the Twitter timeline of anyone remotely interested in politics. Weird, right? What does a movie about a young girl in dynastic China who goes to war in place of her ailing, aging father have to do with modern politics?

Nothing and everything! The centuries-old legend has about as much to do with politics as it does with liberal propaganda, and yet, here we are!

See, Mike Pence, the Indiana governor recently named to the Donald Trump ticket, wrote an op-ed criticizing the movie when it came out in 1998. He wrote that it was very clearly liberal Disney’s attempt to control the conversation around women in the military. No, not kidding. Read the whole column, courtesy of Buzzfeed:

Just spent a memorable Fathers Day, like so many other all American Hoosier dads, with my kids at the new Disney film entitled, “Mulan”. For those who have not yet been victimized by the McDonald’s induced hysteria over this film, Mulan is a fictional account of a delicate girl of the same name who surreptitiously takes her fathers place in the Chinese army in one of their ancient wars against the Huns. Despite her delicate features and voice, Disney expects us to believe that Mulan’s ingenuity and courage were enough to carry her to military success on an equal basis with her cloddish cohorts. Obviously, this is Walt Disney’s attempt to add childhood expectation to the cultural debate over the role of women in the military. I suspect that some mischievous liberal at Disney assumes that Mulan’s story will cause a quiet change in the next generation’s attitude about women in combat and they just might be right. (Just think about how often we think of Bambi every time the subject of deer hunting comes into the mainstream media debate.)

The only problem with this liberal hope is the reality which intrudes on the Disney ideal from the mornings headlines. From the original “Tailhook” scandal involving scores of high ranking navy fighter pilots who molested subordinate women to the latest travesty at Aberdeen Proving Grounds, the hard truth of our experiment with gender integration is that is has been an almost complete disaster for the military and for many of the individual women involved. When Indiana Congressman Steve Buyer was appointed to investigate the Aberdeen mess, he shocked the public with the revelation that young, nubile, 18 year old men and women were actually being HOUSED together during basic training. Whatever bone head came up with this idea should be run out of this man’s Army before sundown. Housing, in close quarters, young men and women (in some cases married to non-military personnel) at the height of their physical and sexual potential is the height of stupidity. It is instructive that even in the Disney film, young Ms. Mulan falls in love with her superior officer! Me thinks the politically correct Disney types completely missed the irony of this part of the story. They likely added it because it added realism with which the viewer could identify with the characters. You see, now stay with me on this, many young men find many young women to be attractive sexually. Many young women find many young men to be attractive sexually. Put them together, in close quarters, for long periods of time, and things will get interesting. Just like they eventually did for young Mulan. Moral of story: women in military, bad idea.

So, to sum it up, Pence thinks that “women in military, bad idea” because men who served with women couldn’t stop molesting them and because even the titular character of a Disney movie fell in love with her superior.

People from The Hill, Raw Story, CAFE, and more have been running with this story and it’s likely that more of Pence’s op-eds and radio segments will be coming out in the next few days and weeks. Will anything top this furious rant against the liberal agenda, women in the military, and Mulan? Who knows.