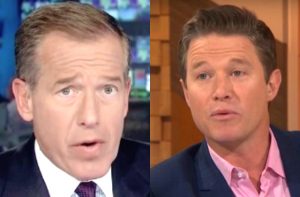 In the wake of the controversy over the Donald Trump‘s hot mic comments about “grabbing [women] by the pussy,” NBC suspended Billy Bush, who can also be heard making inappropriate comments about women. Not a terribly surprising move: Bush after all laughed along as Trump talked about how he failed at trying to seduce Bush’s coworker. But now reports are surfacing that NBC is looking to fire the Today show host entirely.

This confuses me for a few reasons. First of all, because NBC executives said that they didn’t plan to reprimand Bush when the tape first hit last week. Have his comments somehow become more offensive since then?

Second of all, NBC reportedly was in the process of editing Bush’s comments out of the video before they were scooped by The Washington Post, who posted the video in full. If Bush’s conduct was so bad that they knew they wanted to fire him, I’m not sure why they were actively covering it up. Sounds to me like they were perfectly happy to keep him around until it was leaked.

But most importantly, I thought NBC was a place for second chances. After all, another NBC News host Brian Williams was also suspended for a whopping six months after he was caught making false reports about his time in Iraq and elsewhere. But NBC didn’t fire him; they just shunted him sideways into a cozy position as MSNBC’s chief breaking news anchor. They even gave him his own show when he did well enough at that.

I think without condoning his actions, we can recognize that Bush’s remarks were nowhere near as bad as Trump’s. Donald Trump bragged about having a history of grabbing women by the genitals knowing that his wealth and power would shield him from any consequences. The worst quote from Bush is to talk about how an actress was “hot as shit” and say she had “good legs” out of her earshot.

In short, Bush is guilty of what Trump claims he’s guilty of: locker room talk. Locker room talk in a private setting, and not in a time or place when it would make his female co-workers feel uncomfortable. It’s incredibly lame coming from a then-33-year-old married man while on the job, and no doubt worthy of a suspension. But a fireable offense? Ten years after the fact?

What was Williams guilty of? Oh nothing much, just inventing the news wholesale, i.e., the single worst act of professional misconduct a journalist can commit.

Let’s take just one example, because I often hear people downplay the extent of William’s journalistic sins to merely “exaggeration” or “misremembering.” Williams said repeatedly over the course of a decade that while he was staying in New Orleans’ glitzy Ritz-Carlton during Hurricane Katrina, “armed gangs had broken into the 527-room hotel, brandishing guns and terrorizing guests.” The first time he told the story was only two years after the hurricane. At least three times he told it was in a professional setting, including as a source in two books.

Subsequent investigations found that nothing even remotely close to that happened. The notion that Williams “misremembered” whether he was in a building overrun by hostile gangs two years after it happened is absurd. The notion that saying an entire building was overrun by hostile gangs when actually nothing happened is an “exaggeration” is absurd. He lied, blatantly and repeatedly, end of story.

I can safely say that there are probably hundreds if not thousands of people at NBC who are guilty of Bush’s foibles, who didn’t have the bad fortune of sitting near a mic’d up future presidential candidate when they did so. Can anyone at NBC honestly say that they’ve never laughed along at a private conversation that would sound awful in the light of day? That they’ve never made sexually suggestive comments about an acquaintance behind their back? You know, at the network that hired Howard Stern and Alec Baldwin? The network that was more than happy to employ Trump right up until he insulted Mexicans instead of women?

On the other hand, Brian Williams fabricated stories. And for that, he gets a big chair over at MSNBC. Maybe that’s good P.R., but don’t tell me it’s justice.