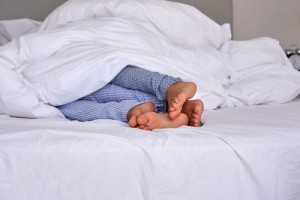 On Wednesday, the Internet was forced to wait until the extremely late hour of 10:01 a.m. ET to find the day’s favorite hated publication — a Slate blog post decrying the act of spooning as inherently sexist.

Author J. Bryan Lowder, an associate editor with the website who “writes and edits for Outward, Slate’s LGBTQ section, and for the culture section,” composed a short treatise that pondered a very important question. One that, to his knowledge, no other major online publication had ever tackled. In other words, spooning — a “terrible idea…that’s fraught both physically and ideologically.”

Wait, what’s wrong with cuddling with a partner, while awake or during sleep?

“Big spoons are manly and will take care of you (provided you let them use you to take care of themselves); little spoons are fragile, passive creatures that need to be held and kept safe. This, of course, is fundamentally a sexist arrangement, one that casts the big spoon as ‘the man’ and the little spoon as ‘the woman.’ To say that this power imbalance is built into all acts of spooning — whichever the sexes engaged — is not, I think, an overstatement. Indeed, I would argue that spooning is always already a power play, a perverse strategy by which we nightly enact the unjust relations of ‘big’ and ‘little’ privilege that plague our society on every level.”

Whether a heterosexual, gay, lesbian or trans couple or group is spooning, Lowder argues that it is wholly sexist, wrong and should be forever discontinued. Because of body placement and coverage, it’s obvious that whoever the bigger spoons are are taking away the power, identity and individuality of the littler spoons.

This is the point of the response article where I’m supposed to say Lowder is dumb, his ideas are dumb or both, and explain my reasoning. That, or I’m expected to deliver an even more extreme version of his anti-spooning statement, possibly calling for an end to all multi-person seating and sleeping arrangements.

Yet I’m not going to do that, because I didn’t really have an emotional reaction to Lowder’s claims. I don’t really care what he thinks about spooning, nor am I too concerned with his attempt to tell me how to sleep. (I wouldn’t listen anyways, because spooning feels awesome — whether I’m the big spoon or my partner is.)

Instead, I want to ask the author a very serious question: Isn’t “conscious cuddling,” the proposed alternative to spooning, just a synonym for giving one a side hug?

“It’s bracingly simple, I know, but it is the balm we need. Vertical cuddling — whether with an arm loosely paced around the neck, or a head freely reclined on a shoulder, or just sitting cozily side-by-side — removes much of the risk of physical discomfort and all of the semiotic violence that spooning conveys. It also allows for intimacy we actually experience because we are, you know, awake.”

Aside from the fact that conscious cuddling includes a no-touch option, I cannot distinguish Lowder’s suggestion from the side hug. Plus, I’m intrigued by his emphasis on being “awake,” which he buries at the end of the blog post. Despite its tardy appearance, the author’s insistence on being conscious for the act suggests that he just doesn’t want to be touch anyone (or be touched) while he’s asleep. Which is a totally valid personal request, to be sure, but grounds for calling the act of spooning a sexist one?

Whatever. I still like spooning and being spooned, so I’m not going to be changing that habit anytime soon. Meanwhile, here’s what the rest of Twitter thought in true Baby Hitler-esque fashion:

I was just thinking about how cuddling offers so few avenues for political expression. I’m glad we’ve now fixed this problem.

"We've spent thousands of years telling people what to do in the privacy of their bedrooms and spooning won't get a free pass" -Humans, 2015

Someone will tell me how much they love something I wrote but they don't share it. Then they tweet an angry link to a spooning think-piece.

finally we're having the discussion we need about the "semiotic violence" of spooning https://t.co/WMvqYAx6jM

the big troll here wraps so perfectly around the little troll https://t.co/vSfLQ6RK14 pic.twitter.com/MZU0hqnUmu

At least Lowder is having some fun with it.

@the_nightspirit Here's one for you, @BuzzFeed.