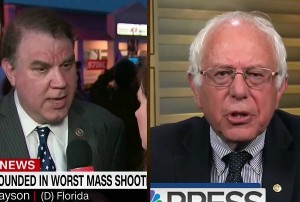 Conservatives sure do like to get hung up on semantics when it helps them avoid the substance of an issue, but their recent mockery of liberals like Alan Grayson and Bernie Sanders just doesn’t hold up. Sanders was criticized for recommending a ban on “automatic weapons” on the basis that fully-automatic weapons are already effectively banned, while Grayson was mocked for correctly identifying the rate of fire of an AR-15. Both criticisms are wrong.

Florida Democratic Congressman Alan Grayson is being mocked for saying that the AR-15 used in Sunday’s mass shooting in Orlando could fire 700 rounds per minute, with one conservative even offering to donate $50,000 to charity if Grayson could achieve that rate of fire with a semi-automatic AR-15. The basis of this criticism is that no human being could possibly pull the trigger fast enough to squeeze off that many rounds. As is often the case, reality is not the conservatives’ friend:

Some of the people in these videos are using an accessory, called a “slide stock,” that helps the shooter to fire more quickly, while others are using a technique called “bump fire” that uses the kick from the weapon to quickly fire rounds, but none of the semiautomatic weapons in that video were modified for automatic fire. Pay up.

As for Sanders, those mocking him are keying in on the difference between “semi-automatic” firing capabilities, which require one trigger pull for each round fired, and “fully automatic,” which requires only a single depression of the trigger for continuous fire. One hint that this argument is faulty is that firearms enthusiasts are always sure to distinguish between “fully” and “semi” automatic, demonstrating that there is no clear definition for just plain “automatic.”

In fact, the term “automatic” can refer to the loading action, not the firing capability, in which case Sanders is technically correct with regard to both of the weapons used by the Orlando shooter, a  Sig Sauer MCX and a Glock 17, both of which feature automatic loading mechanisms. This is not merely some technicality to get Sanders off the hook, but one which is recognized by gun experts like NRA-certified firearms instructor Carrie Lightfoot, proprietor of the Well Armed Woman blog:

AUTOMATIC – A firearm designed to feed cartridges, fire them, eject their empty cases and repeat this cycle as long as the trigger is depressed and cartridges remain in the feed system. Examples: machine guns, submachine guns, selective-fire rifles, including true assault rifles. A fully automatic firearm is capable of sequentially firing two or more cartridges with a single pull of the trigger. A fully automatic firearm is also called a machine gun.

Automatic can also refer to a semi-automatic firearm.

A term used often to describe what is actually a semi-automatic pistol. It is, technically, a misnomer but a near-century of use has legitimized it, and its use confuses only the novice.

The interchangeable use of “semi-automatic” and “automatic” may be distasteful to conservatives, but it is at worst an imprecise but recognized description, and at best, a technically correct description of the loading mechanism of these firearms. But really, what exactly is the practical difference between a weapon that can be fired in a crowded club at the rate depicted in the video above, and a fully automatic firearm? That’s a question conservatives don’t really want anyone asking, so they focus on silly arguments over semantics, arguments they ignored when Ted Cruz claimed to be making “Machine-Gun Bacon” with a not-machine gun.