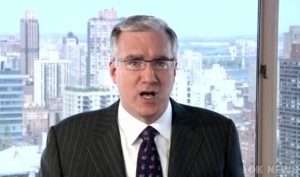 In a web-only Special Comment, former and future Countdown host Keith Olbermann defended filmmaker Michael Moore against criticism (notably from MSNBC’s Ed Schultz) of the liberal icon’s statements on the killing of Osama bin Laden. While Olbermann stated up front that he had no problem with the way the shooting went down, he defended Moore’s right to “question” the official story, and called Schultz’s attack on Moore “outrageous.”

Olbermann makes a lot of points that I might have made with a cooler head, but he misses a few key elements, as well. He is absolutely right that no one should try to “silence” Moore, but by the same token, neither should Ed Schultz or I be prevented from wishing aloud that he would shut the f**k up. It is a rather obvious point, but Olbermann is correct to note how passions can swamp the free exchange of ideas, and I would only ask that he realize that any admonition for Michael Moore to shut his face are made with the full understanding that there is no chance it will happen.

He also rightly points out the value in questioning the official story, noting the perils of failing to do so, and noting some of the ways in which Moore’s previous skepticism has been borne out. The problem isn’t in asking questions, but in dispensing half-assed answers, like that bin Laden “was executed.”

Both Moore and Olbermann also miss the point that the problem, in this case, wasn’t the “official story,” but rather, the lack of one, in the rush to provide unprecedented access to facts that were still being developed without the benefit of full debriefing. That’s an important distinction to make, because it casts the contradictions of that emerging story in an entirely different light.

Moore’s presumptions and presumptuousness made me angry, but I can leave open the possibility that Olbermann (for a change, the cooler head) is right, that it is better to err the way Moore did than to march in lockstep, but when you err this badly, expect to hear about it. From FOK News Channel: