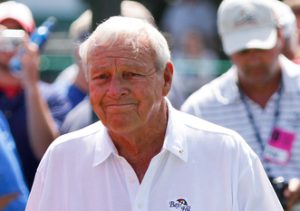 The sports world took to Twitter late Sunday night and early Monday morning to pay tribute to “The King,” Arnold Palmer, who passed away at the age of 87.

Tiger Woods said that “it’s hard to imagine golf,” without Palmer — whose immense charisma earned him the adoration of fans across the world.

Thanks Arnold for your friendship, counsel and a lot of laughs. Your philanthropy and humility are part of your legend.

(2/2) It’s hard to imagine golf without you or anyone more important to the game than the King.

OMGosh sad news! Will miss that vice handshake and glint in your eye as you tried to crush my hand! RIP King Arnold pic.twitter.com/b9eDVP9ADJ

A genuine CHAMPION = ARNOLD PALMER May he RIP! (gr8 read by) @Ian_OConnor https://t.co/WOSU38pNRq

RIP Arnold Palmer.
U r the reason I love golf!

Here was Arnold Palmer: When he'd return his courtesy car, he'd wash it, gas it and leave 4 dozen balls in it. Classy at all times.

Another legend lost. Sad to hear of the passing of Arnold Palmer. One of the absolute greats! Thoughts and prayers with his family.

May there be nothing but fairways and greens wherever you are, Arnold Palmer. From all of us who… https://t.co/iANV2k5CwX

Rest in Peace to the legend Arnold Palmer. May God bless his family and friends.

Sad to hear of the passing of Arnold Palmer. #RIPArnie

President Obama shared a picture of himself putting on the Oval Office carpet, with Palmer looking on.

Here's to The King who was as extraordinary on the links as he was generous to others. Thanks for the memories, Arnold. pic.twitter.com/UlyfpIBOL2

And republican nominee Donald Trump, who’s active in the golf course business, tweeted his condolences too:

Really sad news: The great Arnold Palmer, the "King," has died. There was no-one like him – a true champion! He will be truly missed.

I just got the news at about 8:45 that Arnold had passed. I was shocked to hear that we lost a great friend (continued) pic.twitter.com/skehUsQgww