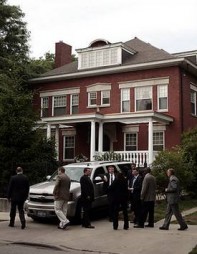 The slow news day may be a thing of the past. Last night, during what was supposed to be a quiet Memorial Day BBQ for the Obama family near their home in Chicago, a bizarre standoff of sorts developed between the press pool covering President Obama‘s trip and followers of Nation of Islam, the extreme group led by Louis Farrakhan. A play-by-play from the Chicago Sun-Times:

Just a few blocks from Obama’s home in the Kenwood/Hyde Park neighborhood, Obama’s friend Marty Nesbitt lives across the street from the ornate yellow-gold home where Farrakhan lives.

For the past two years, when Obama has brought his family over to Nesbitt’s home, the press pool bus parks near Farrakhan’s house. This usually does not cause a problem, but Saturday night — as most of the city was indoors watching the Chicago Blackhawks beat the Philadelphia Flyers in the Stanley Cup finals — a bit of tension emerged on Woodlawn Avenue.

A pool report noted that as a dozen reporters and photographers following Obama stood on the sidewalk in front of Farrakhan’s home, someone’s foot touched the city-owned curbside grass.

Immediately, a polite man in jeans and T-Shirt emerged to ask the press to stay off the grass, the report stated. Soon he was pacing and talking on a cell phone. He went inside the mansion’s black wrought iron fence, crossed the well-landscaped yard, lifted a water bucket behind rose bushes and retrieved a walkie-talkie. He was heard to refer to “the CIA.”

Apparently that walkie-talkie was a direct Fruit line:

Eventually a dozen “Fruit of Islam” agents arrived. As each casually dressed man arrived, he exchanged elaborate handshake/hug/double air-kisses with others. Two walked by a reporter, chanting “Islam.”

The men filmed and photographed the reporters, the van and its license plates with their cell phones.

The man did. The agent asked the reporters to go back into the press bus, which they did. Before they did, some asked the Nation of Islam crowd if they could use the rest room in Farrakahn’s home. No offer was made.

No offer was made! Alas, that’s the sort of trip that might have made for some good twitpics. Also code for this was the most fun the Pool had all night. In the meantime the BBQ apparently went on unaffected.