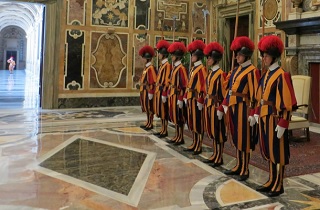 Lost in the conservative freakout over the State Department’s decision to move the U.S. Embassy to the Holy See (The Vatican!) into a building that’s closer to the Vatican is the fact that, aside from being obvious retribution for exposing Nobama’s birth certificate or something, the State Department says that the current facility is a horrible eyesore that lacks the security measures available at their new, non-ugly location in the U.S. Embassy complex they’re moving it to. Maybe they love ugly, but are Republicans now against embassy security again?

According to a senior State Department official, explaining to reporters why conservatives need to simmer down over the embassy move, the current embassy ain’t got no alibi:

Currently, the – our Mission to the Holy See is located in Rome, and it’s about 1.9 miles between our Embassy to the Holy See and the Vatican. It is a converted residential property. And if you were here, I’d show you pictures of it, and it is a decidedly ugly, slab-sided, unprepossessing building in Rome.

Oh, snap. That’s saying a lot, too, given that the embassy in question deals with the Vatican, which is guarded by the Swiss Guard, whose uniforms are the ugliest thing since the 70s-era Houston Astros. They look like Ponce de Leon being run over by the Partridge Family bus.

Speaking of guards, the same State Department official also pointed out that the current embassy is a sitting ugly duckling, and the new joint is a beautiful, secure swan:

So security – then the second issue is obviously security. The Mission to the Holy See is not in a building that has the kind of physical security protection that we would like it to have. It doesn’t have the setback from the street that is available in its new compound, and there are – it does not have the level of other security protections, including Marine security guards that are available at the combined U.S. Government compound.

The briefing also handled several other concerns from the esteemed Delegation from Wingnuttia, including:

Okay, I made that last one up. It’s not a myth.

None of these facts should get in the way of some good old-fashioned pandering, but they do give the media something smart to say back when confronted by it.