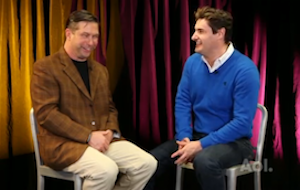 There have been a lot of big wars of words going on in the past few weeks, but perhaps the biggest one was the battle between Stephen Baldwin and Sean Hannity! Ok…maybe it wasn’t the biggest, but at least this one appears like it will actually come to a better ending than most as Baldwin has offered a public apology to the Fox News host via AOL’s PopEater.

It all started last week when Hannity played the 2007 voice mail recording of Alec Baldwin yelling at his daughter on his radio show. Stephen, defending his brother, sent an angry quote to the New York Post which started a week-long war of words.

Fortunately, it looks like Baldwin (the younger) has realized that this fight wasn’t a very Christian thing for either of the two devout public figures to engage in, so, since he can’t retroactively turn the other cheek, he’s offered a public apology while speaking to PopEater’s Rob Shuter.

“I’m here … to publicly apologize to Sean Hannity and say that I’m very sorry. That was not the correct thing to do, and I feel terrible about it. In turn, it became a much more exacerbated situation because he got upset and he got angry and kind of used his platform in a greater way to make the matters worse. So I just wanna call it even, and wanna say Sean, from the bottom of my heart, God bless ya. I apologize and wanna take the higher road here, bury the hatchet and just hopefully start over.”

When Shuter asked him how it all started, Baldwin explained that it truly hurts to hear anyone attack his family in public and that it’s the old Massapequa, New York still in him. He said that, were he to see someone hit one of his brothers on a red carpet, he wouldn’t be able to help from “beating the tar out of the guy.” However, he promised with a smile that he’d make sure to pray for forgiveness afterwards.

Check out the clip from PopEater below: