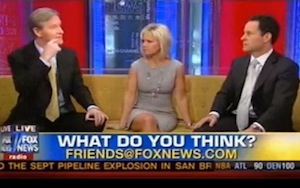 Earlier this week Fox and Friends reported with reasonable outrage from — both the show’s co-hosts and viewer email — that the TSA was considering collecting DNA samples via Q-tip swab from the mouths of prospective airplane passengers. Steve Doocy pointed out how easy it would be to fake, saying “all you gotta do is put someone else’s DNA in your mouth.” This morning Fox and Friends apologized, but not for Doocy’s awkward suggestion of how to cheat the test, but for reporting that on something that isn’t actually news.

In recent weeks there have been a number of conservative websites picked up the story of TSA collecting DNA until Media Matters pointed out that the TSA blog clarified that the government agency was not testing the scanner, and had no plans to use DNA testing.

From The TSA Blog:

Again, TSA is not testing and has no plans to use any technology capable of testing DNA.

As you can see in following clips: first is the incorrect report on Fox and Friends and the second is the apology from Mr. Doocy for reporting on the story incorrectly: