Stop Posting Political Memes: The Campaign Hasn’t Even Started Yet

Stop Posting Political Memes: The Campaign Hasn’t Even Started Yet 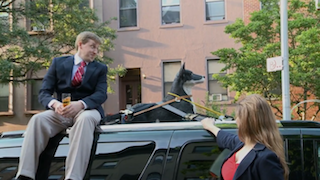 Protestors tried to crash Gov. Mitt Romney‘s fundraiser in The Hamptons Sunday. Among their ranks was the satirical Romney Mobile, a black escalade plastered in corporate sponsor stickers (it’s actually sponsored by MoveOn.org) that follows the campaign, using sarcasm and humor to criticize Romney. Strapped to its roof is a plastic dog.

It’s a reference, or course, to Seamus, the family dog who was strapped in his kennel on the roof of the Romney station wagon during a road trip in 1983. The Romney Mobile is only the latest to try and position the nearly 40-year-old story as crippling evidence Romney is unfit for the White House. It seems a bit silly to use the story to attack Romney, but inconsequential things like gaffes thrown around by campaign surrogates on cable news or political memes people post on their social media profiles are used by both sides to make their argument.

But does it even make a difference?

Evidence suggests most people have already decided who they’ll vote for in November, and the precious few who haven’t will make up their mind in the final days and weeks before they vote. So in a way, the campaign hasn’t even started yet. Right now, it’s all about raising lots and lots of cash that will be used in the final days before the election to inundate these undecided voters with a barrage of campaign ads.

In the worst cases, presidential candidates can count on an automatic forty percent of the vote, and in the best cases, up to sixty, James E. Campbell of the State University of New York at Buffalo told Washington Post. And most “leaners,” people who are leaning toward one candidate or the other, end up voting for the candidate they were favoring. Ninety-one percent of voters leaning toward President Barack Obama voted for him in 2008, Campbell said.

That leaves a tiny number of voters who will decide the election; seven percent of voters in 12 swing states were undecided, according to the latest Gallup poll. And while the word “undecided” conjures images of thoughtful voters consuming campaign coverage and carefully weighing the candidates, studies have shown that these late-deciding voters are often less interested in politics, care less about the outcome of the election and tend to be less politically sophisticated than other voters.

So maybe the Seamus story will be effective after all. But probably not.

“When you’re in the middle of a campaign, there’s a tendency for people, especially the media, to overestimate the importance of certain events,” Alan Abramowitz, a political science professor at Emory University told Washington Post, adding, “those things have no measurable impact [on voters’ decisions]. The media are interested in getting people’s attention, but a lot of the stories you read or see are focusing on things that are trivial.”

Remember President Barack Obama’s “the private sector is doing fine” gaffe? The Romney campaign pounced on that. With 8.2 percent unemployment, obviously, President Obama is out of touch, they said. But the attack wasn’t successful; President Obama’s approval rating went up in the three days after he said that.

While campaigns’ attacks against one another are often ineffective at moving the needle in their direction, they can be helpful in rallying the base to give. Hammering President Obama’s gaffe is red meat for Republicans. And Romney’s response to the Supreme Court’s ruling on the Affordable Care Act wasn’t to win over moderates by pontificating on policy, it was to excite the base. “If we want to get rid of Obamacare, we’re going to have to replace President Obama,” he said. It worked. The candidate who has received tepid support from many in his party raised $5.5 million in a day. The number of individual donors that day dwarfed the number of individual donors for the entire previous month.

As protestors at Romney’s fundraiser in the Hampton’s did their best to influence to outcome of the election, Romney was doing his part, not by campaigning, but by fundraising. The following day, monthly fundraising figures were released, and the Romney campaign and RNC had brought in a whopping $106 million in June. The Obama campaign and DNC raised $71 million in the same time period.

Later that day, the Obama campaign sent out an email to donors. “We could lose if this continues,” the subject line read. “We’ve got some work to do. Pitch in $3 or more right now to start closing the gap.”

Posting political memes or trash talking candidates for of their gaffes will enrage your friends of a different political persuasion, but it probably won’t tip an election. Wait until October to do it instead. In the meantime, pitch in $3 — a drop in the bucket — for the campaign of your choosing to spend toward buying commercial airtime in Ohio and Nevada.