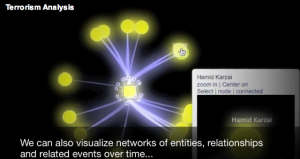 On Wednesday, The Danger Room blogger Noah Shachtman profiled a young information services company called Recorded Future, which monitors the web in real time and, to be perfectly honest, sounds like something straight out of a sci-fi film. Recorded Future uses a collection of futuristic-sounding analytical tools like a “temporal analytics engine” and “sentiment analysis” to “find the relationships between people, organizations, actions and incidents—both present and still-to-come.”

Of course, boasting that your system can predict future data trends (read: events) is bound to attract some attention from big name investors. Sure enough, the small Cambridge, Mass., company has signed investment deals with both Google Ventures and In-Q-Tel, the investment arm of the CIA. From The Danger Room:

Recorded Future also advertises itself as a brand marketing and personal research tool. That said, one look at the comments on Shachtman’s post reveal there’s plenty of opposition to analysis of the Internet’s publicly availably information. And as Shachtman notes, this isn’t the first time Google and the CIA have had overlapping interests and there are plenty of critics alleging a too-cozy-for-comfort relationship between the two. Moreover, some of Shachtman’s commenters clearly consider this the beginning of the end of online privacy.

Frankly, though, until Tom Cruise comes bursting through the office door to arrest our Managing Editor for the future assault of some Mediaite commenters, my inner geek is more concerned with how cool this sounds.