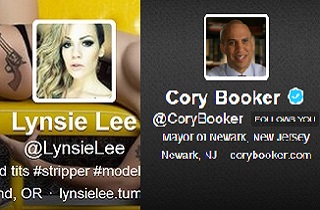 Buzzfeed‘s Benny Johnson broke the tongue-wagging story of Newark Mayor Cory Booker‘s Twitter Direct Message to a hilarious Portland, Oregon stripper named Lynsie Lee, who works at a vegan strip club called Casa Diablo. Although Johnson’s headline blares “NSFW: Cory Booker’s Interesting DMs With A Portland Stripper,” the NSFW part is all the nekkid pictures Johnson digs up to get across the point that Lynsie is a stripper. The DMs themselves could be out of a Victorian courtship primer.

Booker and Lee appeared in the Twitter movie Follow Friday: The Film, and the famously Twitter-happy mayor struck up a friendship with Lee. Johnson details the story in that Buzzfeed-y way that looks like all the pages from a children’s picture book laid end-to-end, which is really creepy when lots of the pictures are sexy nude twitpics. Long story short, in March, Lee joked that she’d love to be Booker’s First Lady some day, and another female Booker fan “warned her off,” claiming to “DM on the reg” with Hizzoner, at which point Lee produced a screenshot of this exchange:

Booker: Its only fair

What’s the big deal? Not much. Cory Booker DMs a lot, and he’s single, so if you view this as flirtation rather than innocuous charm, so the eff what? It is, however, a good excuse to throw lots of unrelated naked pictures of naked boobies on your blog, and for people like Gawker (Gawker is a person, right?) to snark about the future Senator Booker’s sexuality:

Cute! And newsworthy, certainly, for the fact that Cory Booker seemed to be expressing—pantomiming?—some kind of flirtatious interest in Lee. Who Cory Booker is dating, or not dating, has been an open question throughout his mayoralty and into his Senate run.

That’s not actually true, in the sense that Gawker implies. Booker actually has been pretty clear that he dates women, but doesn’t think that should matter. Maybe someone else really wants people to know that Mayor Booker kinda sorta flirted with a stripper, who knows.

The scooplet has made a pseudo-celebrity out of Lee, who is now being pursued by reporters. The second-funniest thing about this story was Politico media reporter Dylan Byers retweet-shaming New York Times reporter Michael Barbaro‘s attempts to contact the principals in this story:

Michael Barbaro ‏@LynsieLee Can you follow me? I write for the New York Times.

Michael Barbaro ‏@hellocalla @kn8 Call — can you follow me back? I am a reporter for The New York Times.

Sorry, man, but that hasn’t been an effective line since about 1978.

The funniest, though, was this crack from Lynsie Lee herself: 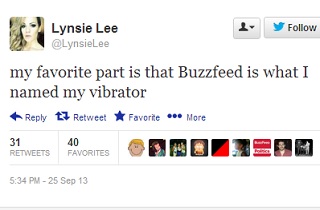 Don’t look now, but I think Ben Smith has a golden cross-marketing opportunity on his hands, as long as he can beat The Daily Caller and The Huffington Post to the punch.

Daily Intelligencer’s Joe Coscarelli managed to get a statement from a Booker spox:

“I think it’s pretty well known that the mayor talks with people from all walks of life on Twitter,” Booker spokesman Kevin Griffis told Daily Intelligencer. “There have been a couple of stories about that over the years. Really, the most shocking part of this story was learning there is a vegan strip club in Portland.”