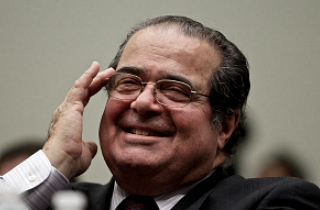 If you ever wanted to learn how to turn humor into something really boring, become a law professor, find a method to quantify how funny a Supreme Court justice can be, and then rank the justices against each other.

So thank you, UC Irvine professor Richard L. Hasen, for creating the SCOTUS Sarcasm Index. (Note: that was a sarcastic statement, in case you weren’t aware, because apparently, we live in a world where sarcasm must be academically measured.)

The New York Times reports that, according to Hasen’s methodology, Justice Antonin Scalia unsurprisingly ranks the highest on the list, with a 2.78 on the index. The next most sarcastic justice is Samuel Alito, who scored a “distant” 0.43 — quite reflective of his nickname “Scalito.”. (And the rest of the justices, like John Roberts and Sonia Sotomayor, are utter milksops.)

But how does one differentiate “sarcasm” from other types of humor, like “dryness” or “ribaldry” or “sardonicism ” (which Elena Kagan has in spades)?

Professor Hasen’s methodology is clever but not airtight. He considered assessments of Supreme Court opinions in law review articles from 1986, when Justice Scalia joined the court, through the end of 2013.

There were 134 opinions described as sarcastic or caustic, and Justice Scalia wrote 75 of them, more than all the other justices combined. The index took that number and divided it by the number of years the justice has served.

The Times points out that the results may have been skewed by Scalia’s longstanding reputation of being sarcastic (by constitutional lawyer standards), but Hansen is aware of that legacy. And according to his paper’s abstract, that might hurt Scalia in the long run:

On the one hand sarcasm makes his opinions punchy and interesting, clarifying where he stands in a case and why and gaining attention for his ideas. On the other hand, such heavy use of sarcasm can demean the Court, and it arguably demonstrates Justice Scalia’s lack of respect for the legal opinions of his colleagues. In the end, his sarcasm may be his most enduring legacy.

See, technically, that’s called “dry humor,” but you know what, that was a decent stab at it.

This isn’t the first time that a political scientist has tried to objectively measure how funny Antonin Scalia is, but for the love of John Marshall, please let it be the last.