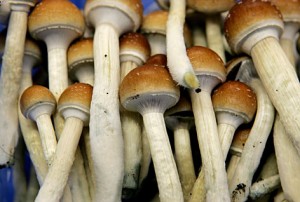 As the midterms come up and California readies itself to vote on Proposition 19 and maybe legalize marijuana, the proponents of some other currently illegal drugs have also been making headlines. One recently published study is making the case for the benefits psilocybin (the active ingredient in psychedelic mushrooms) causes in relieving the anxiety in cancer patients. At least we think that’s what the study’s showing. We may be confused and still coming down from all the cancer-related anxiety we relieved over the long weekend.

The study (which, as NPR points out, is part of a larger push to again begin examining the effects hallucinogenic drugs may have in psychology) was a pilot program in which patients received the drug in one session and a placebo in another and reported to scientists on their reactions.

“On a couple of measures of mental health, the patients showed less anxiety months after treatment and a big improvement in mood even a half-year after a single psychedelic session.

To be sure, this study, billed as a pilot test, had some flaws, most notably that each patient served as his or her own point of comparison, or control. And the researchers concede that it was pretty much impossible for the patients not to know pretty quickly whether they were getting the drug or the dummy medicine in a given session.”

While this data is clearly not definitive, it is pretty fascinating. You can read more about the study at NPR and the full report here.