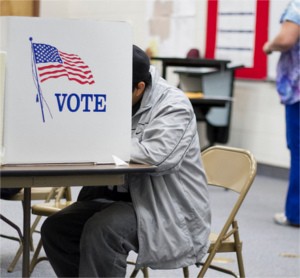 A new study adds credence to the argument that strict voter ID laws are designed to suppress minority voters — and, effectively, to skew elections in favor of Republicans.

According to a new paper, entitled “Voter Identification Laws and the Suppression of Minority Votes,” researchers found that “strict voter identification laws do, in fact, substantially alter the makeup of who votes and ultimately do skew democracy in favor of whites and those on the political right. These laws significantly impact the representativeness of the vote and the fairness of democracy.”

Proponents of strict voter ID laws contend that they ward off fraud, which they assert is a very real threat to the electoral process, and have argued that eligible voters who lack photo IDs are unlikely to vote anyway. Critics of the laws, which count among them Supreme Court Justice Ruth Bader Ginsburg and former Attorney General Eric Holder, have framed it as a pressing civil rights issue. The study’s authors noted that “there is clear evidence that these laws are passed almost exclusively by Republicans and further confirmation that they tend to emerge in states with larger black populations.”

Between 2008 and 2015, 34 states enacted voter identification laws, and several states are considering even stricter measures.

ThinkProgress, which originally reported on the study, spoke to one of the researchers, Zoltan Hajnal at the University of California, San Diego, who confirmed that “given the number of states that have these laws, there’s a very real possibility that in a very tight election, it could sway the contest one way or another.”

Strict voter ID laws, he noted, “represent another avenue through which minority voices can be muted.”

Ari Berman, author of Give Us the Ballot: The Modern Struggle for Voting Rights in America, told Mediaite that the results of the new study, while “certainly dramatic,” recalled other studies that have shown voter ID laws are successful at dissuading certain demographics from voting. Specifically, he noted a 2014 study by the Government Accountability Office, which found that voter ID laws in Kansas and Tennessee reduced turnout by 2 to 3 percent, particularly among young, black, and newly registered voters.

“I believe that is why Republicans are so aggressively pushing these laws,” Berman said. “To reduce turnout among Democratic-leaning voters, especially considering there is scant evidence of voter impersonation fraud to justify them.”