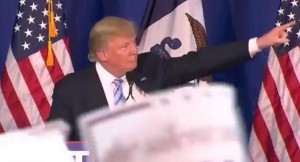 In the modern social media-driven news cycle, there are things that are “too good to check,” and then there are things that are too good to wreck, as in by telling the truth about them. Pop quiz, hotshot: you’re at a Donald Trump rally, and the harshly anti-Muslim candidate makes a remark about a protester who’s wearing a turban as he’s being roughly escorted out. That remark has something to do with what the guy has on his head, but not enough to do with it to make the whole thing connect. What do you do?

Well, if you’re a bunch of lazy media types, you put it out there and count on your audience to make it connect.

I’m referring, of course, to the Great Donald Trump Mockery of a Guy in a Turban of Aught-Sixteen, in which a man in a red turban was among a group of protesters who were roughly escorted out of Trump’s rally in Muscatine, Iowa, and Trump said “He wasn’t wearing one of those hats, was he?”

We collected some tweets here to that effect, but there were also several media outlets of varying size who reported that the purpose of Trump’s remark was “mockery” of the man in the turban, and presumably his turban.

Even on its face, this doesn’t make any sense, and it didn’t make sense to me when I saw the headline. Is Trump not supposed to know what a “turban” is, or did he intentionally mock the turban by calling it a “hat,” because that really stings, and because a guy in a turban is automatically a Muslim, and not, say, Sikh? The whole thing didn’t make any effing sense at all.

Naturally, and inevitably, the full video of the incident emerged, and made it clear that Trump was referring to his “Make America Great Again!” hats, not the turban. As you can see below, MSNBC still has the wrong information on their tweet that contains the video.

"He wasn't wearing one of those hats, was he?" Trump asks after men, one in a turban, interrupt rally https://t.co/2NJWSyGUhm

Watch a longer version below.

He was still trying to insult the guy as not wanting America to ever be great again, but it wasn’t a shot at his “head garb,” as one reporter put it. It was enough of a screw up for ABC News to stealth-edit “mockery” out of its story, which is still out there in aggregated form.

This wasn’t a moment that needed to be oversold as xenophobic mockery, it was already ugly enough. Forget that it gives Trump yet another beachhead in his war with the media, because he will take that ground whether it’s offered to him or not. It was just stupid, at best, and dishonest at worst. Yellow is more like it.

When Rick Santorum was accused of saying something about “black people” but really didn’t. I was one of about two people who reported the thing accurately, and people would ask me “Why are you defending that tool Santorum,” as if being a liberal meant that I should ignore plain facts, as if there ought to be some sort of tension between my role as a reporter/analyst and as a commentator/opinion journalist. The exact opposite is true, of course. My opinion and analysis are only valuable to the extent that I get the other things right. That’s not true of someone who’s only concern is selling a story, like Donald Trump mocking some dude’s turban.