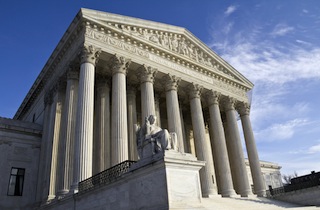 In a pair of high-profile decisions Wednesday, the Supreme Court ruled that the company Aereo was in copyright violation for streaming broadcast television online, but also protected cell phones from warrantless searches by the police.

Aereo is (was?) a service that allows consumers to stream and record broadcast television over the internet. The company argued that it had essentially created mini-antennas, of the type formerly perched atop your television set and protected by law, that were simply the next step in the evolution of television technology.

Broadcast companies sued, arguing that Aereo was less like an antenna and more like cable distributors, who pay retransmission fees for airing network’s content, something Aereo wasn’t doing.

On Wednesday the Supreme Court ruled 6-3 that Aereo was violating the networks’ copyright. However, the decision could have much wider implications, as viewing the cloud storage of content as a public performance, and thus a copyright violation, could imperil other cloud storage services such as Dropbox and Amazon. For a more detailed breakdown of the legal factors and ramifications, check out Pema Levy’s guide to the case.

Meanwhile, in a sweeping unanimous ruling, the high court declared that cell phones — or “smart” phones, as teh kidz lulz doge — were protected from warrantless searches by law enforcement. The two cases in question involve suspects who were linked to crimes based on evidence obtained in their phones, but civil libertarian groups (along with media organizations) argued that modern phones contain so much data that a warrantless search violated the Fourth Amendment.

“Modern cell phones are not just another technological convenience. With all they contain and all they may reveal, they hold for many Americans ‘the privacies of life.’ The fact that technology now allows an individual to carry such information in his hand does not make the information any less worthy of the protection for which the Founders fought. Our answer to the question of what police must do before searching a cell phone seized incident to an arrest is accordingly simple — get a warrant.”