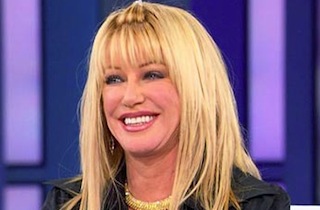 Billing herself as a “writer of 24 books mostly on health and wellness,” the former Three’s Company star declared the Affordable Care Act a massive Ponzi scheme, arguing it disincentivizes doctors and will deny elderly people care. Somers also cited an old issue of Maclean’s that featured a dog on the cover to warn that Canadian medical students were training to become veterinarians rather than doctors due to the pay disparity (more on the dog later). And as evidence that premiums are doubling or tripling, Somers wrote that it was “all you are hearing on the news.”

Both the Atlantic Wire’s Philip Bump and New York Magazine’s Jonathan Chait pointed out that many of Somers’ points are either reiterations of discredited memes—like doctors fleeing Canada’s health care system for America’s more free-market system—or based entirely on personal anecdotes.

But it’s when Somers quoted Winston Churchill and Vladimir Lenin, in a since-removed paragraph, that things really went awry:

And then there is another consideration: It’s the dark underbelly of the Affordable Care Act reminiscent of what Lenin and Churchill both said. Lenin: “Socialized medicine is the keystone to the arch of the socialist state.” Churchill: “Control your citizens’ health care and you control your citizens.”

Also, the cover of a Maclean’s magazine issue in 2008 showed a picture of a dog on an examining table with the headline “Your Dog Can Get Better Health Care Than You.” An earlier version of this post incorrectly said the photo showed and headline referred to a horse.