Swine Flu Returns, Just In Time for “Back to School” Season

Swine Flu Returns, Just In Time for “Back to School” Season 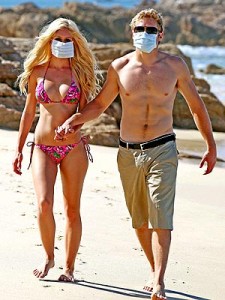 In case you haven’t already been informed by your television via the countless commercials for half priced Old Navy denim or extra durable Five Star notebooks, it’s back to school time kids! And along with the annual advertisements from companies trying to hawk everything from butter to laundry detergent with a “back to school slant,” looks like the H1N1 flu virus has also got a sneaky publicist on its side.

The H1N1 flu virus, or swine flu, seems to have had a more up and down and up again career than Britney Spears in the past six months.

And apparently among those 1 out of 10 infected city-dwellers is the beloved, slightly dorky (but in a good way) Rachel Maddow, as she revealed to Jimmy Fallon this week during Late Night with Jimmy Fallon that she recently had a stint with “the capital F Flu” herself.

Although their conversation about the flu was brief, gossip/ media blogs alike were all dawning frantic headlines like “Rachel Maddow: I Had Swine Flu!” this morning despite her pretty light attitude while discussing her experience with the flu last night.

Definitely a key publicity move for the H1N1 virus during this second wave of swine flu fever that everyone has appeared to have contracted in preparation for the new school year.