Sympathy For The Devils: For Bill Maher, Boston Is A Warped 9/11 Defense All Over Again

Sympathy For The Devils: For Bill Maher, Boston Is A Warped 9/11 Defense All Over Again 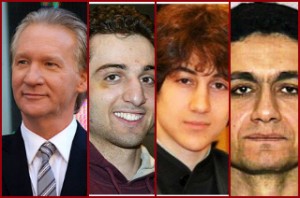 Bill Maher wasn’t always an HBO fixture. Over a decade ago, he was a network guy doing essentially the same show as HBO’s Real Time in the form of Politically Incorrect on ABC.

Maher performed well in the ratings department and likely would still be at the network today if not for one comment that changed his career: Shortly after the 9/11 attacks—a time when the country was at its most jingoistic, its most determined, even its most fragile—the host offered up this poignant perspective:

“We have been the cowards, lobbing cruise missiles from 2,000 miles away. That’s cowardly. Staying in the airplane when it hits the building, say what you want about it, it’s not cowardly.”

Yup – killing thousands of unarmed innocents without warning…that’s the stuff brave men are made of. And following the subsequent severe backlash, network advertisers pulled out quickly. He would be fired a few months later.

But Maher is a unique offering for viewers: An intelligent, unfiltered, obnoxious, condescending, sharp-witted, offensive talent. In other words, perfect for political programming and especially for HBO, not exactly a bastion for conservative commentary. To that end, the pay channel hired Maher to essentially do the same show (without the pesky FCC to police content/language) two years after getting the boot from ABC.

Fast forward to 2013 and the terrorist attacks at the Boston Marathon and subsequent manhunt: No news story has been as big, as riveting, since 9/11: A terror attack involving bombs at a major sporting event—on Patriots Day—in an iconic American city: Three killed, including an 8-year-old boy, and 170 injured, several maimed. The suspects…stupid or arrogant enough not to leave the country (or the state) immediately after the attacks. The police chases, the shootouts, the killing of one suspect, the capture of another later the same day. Easily the story of the decade thus far.

Know this: The coverage the first week following the events in Boston was the good side of journalism. Of course, mistakes were made. But for the majority of the time, it was the kind of news presentation from the good ‘ol days of pre-opinion-journalism based on information, not speculation.

However, after suspect #2 was captured, viewers were treated to the cheesy, ugly, self-serving side of cable news. Pundits, opinion-makers…those who take themselves waaaayyyy-too-seriously, playing the blame game and pointing the finger at anyone and everyone except, you know, the two people directly responsible.

Heard on cable news and from politicians this week: Is it President Obama’s fault? Of course! Maybe it’s immigration policy. Or perhaps it’s the NRA. All examples why public opinion of media is at its all-time low…

On Maher’s Friday night show, the 57-year-old host decided to once again put himself in the same boat (pun intended) as the guilty parties, complaining about the U.S. becoming a “police state” and Boston officers having no justification for “firing into the boat where the kid was hiding.”

This was no kid, Bill. This was a terror suspect who just hours earlier, along with his brother, who officials say threw bombs, grenades and fired on police.

These are same kids who assassinated an MIT security officer while sitting in his car.

So you’ll have to excuse the Boston Police Department for not taking anything for granted when opening fire on that poor kid in the boat…the same one who decided to place a bomb directly next to an eight-year-old named Martin Richard, killing him. This was also a “kid” who could have booby-trapped the area to kill anyone within 100 feet of that boat if given the opportunity.

And at the time, police weren’t 100 percent sure of his capability to kill. If he could be taken alive, great…but not at the expense of the lives of officers on the scene.

Maher’s trained seals in his audience, of course, applaud whatever their hero says, including in this case. But ask yourself this: Would Maher have been as hard on law enforcement if a tea party member been responsible for the attacks—as many on the left secretly (and even publicly) hoped? No punishment, no hail of bullets, would have been enough.

After suspect #2 finally abandoned ship and gave himself up, the residents of Watertown gave the police an impromptu parade, thanking all for putting their lives on the line and getting the job done.

But in Bill Maher’s eyes, Watertown police were “out of hand,” “ridiculous” and “out of control.”

Well, Maher thinks they weren’t cowards at all.

Forget being a television host.

Maher should consider being a defense lawyer instead.