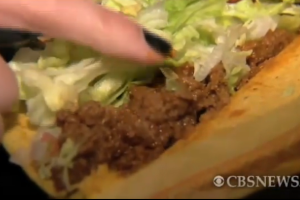 I normally avoid news stories about the quality of our country’s fast food because, at this point, none of them are going to surprise me and, unfortunately, none of them are going to get me to stop eating this crap (for the record, I’m typing this post while indulging in my morning ritual of eating four Big Macs and crying). However, there’s a pretty interesting story going on with Taco Bell this week. A group of people who are apparently so idealistic that they expect real food from Taco Bell have filed a class suit against the chain for not using enough actual beef in their tacos.

The lawsuit is accusing Taco Bell of false advertising since they believe that the seasoned beef promised in ads and on menus is actually a zesty combination of “water, ‘Isolated Oat Product,’ wheat oats, soy lecithin, maltodrextrin, anti-dusting agent, autolyzed yeast extract, modified corn starch and sodium phosphate as well as beef and seasonings.”

Taco Bell has been quick to respond to the claims even though the lawsuit clearly makes no difference and we’ll all continue to return to fast food places day in and day out like zombies who have been forced into these sad circumstances by a combined lack of time, money, and will power.

…oh, I’m sorry. Was that too negative? I just finished my third Big Mac which means I only have one left. This is the saddest part of my day. Sigh.

Anyway, where was I? Oh yeah, Taco Bell’s response. First they just had a company spokesman issue statements but, now that the story’s grown some legs, they’ve brought out the big guns. In this case, said gun was Taco Bell president Greg Creed (or, in his Mexican name, Taco Bell presidente Greg Creed) who had this to say:

“At Taco Bell, we buy our beef from the same trusted brands you find in the supermarket, like Tyson Foods. We start with 100 percent USDA-inspected beef. Then we simmer it in our proprietary blend of seasonings and spices to give our seasoned beef its signature Taco Bell taste and texture. We are proud of the quality of our beef and identify all the seasoning and spice ingredients on our website. Unfortunately, the lawyers in this case elected to sue first and ask questions later — and got their ‘facts’ absolutely wrong. We plan to take legal action for the false statements being made about our food.”

So, the case is heating up. Who knows what will happen next? Will the plaintiff’s be proven wrong? Is this just a bogus lawsuit sullying a good company’s name? Or, will they win, causing a massive shift in the way we American’s view our fast food? Only time will tell. Only time will-

…oh, crap. I just finished my last Big Mac. Now the eating won’t be around to drown out the self hatred! Damn!

Thank God I also got fries.

Check out a news report on the lawsuit from CBS News below: