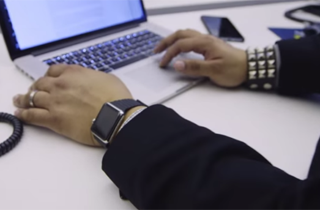 At Mediaite, we cover media feuds in all ways, shapes, and forms, even ones that have to do with wristwear. So imagine our joy when we discovered the editor-in-chief of The Verge was doubling down on his spiky leather bracelet, and calling everyone who critiqued it “old white men.” Oh, this is so over-the-top. It’s like Surprise Christmas here.

It all began when Nilay Patel published a long review of the new Apple Watch on The Verge, revealing that he was given three straps to mess around with. One of them was this metallic-looking strap called the Milanese Loop, and in a throwaway comment, Patel said he chose not to wear it: ” I felt ridiculous wearing the Milanese Loop, so I didn’t.”

In response, former Apple executive Jean-Louis Gassée, writing a “meta review” of Apple Watch reviews, chortled at Patel on his blog by pointing out the thing that Patel was wearing on his other wrist.

Now, we know nothing about the Apple Watch, and could probably describe it using basic words like “revolutionary” and “shiny” and “thing,” because tech is not our forte. But what we can write about is overblown reactions to jokes that are literally one sentence long, which Patel excelled at:

And when Gawker’s tech writer Sam Biddle ended up writing about Patel’s defense of the spiky cuff, Patel struck back:

Guys @samfbiddle is so turned around in the things he hates he just took the side of a Valley VC to try and burn me http://t.co/oq6AjHYmVN

And @samfbiddle is just the latest in an endless series of angry men telling me how I should behave myself.

Enjoy these, your true friends.

Full disclosure, I am a woman, and personally, considering how long Patel’s been talking about his jewelry choices, you’d think he’s J.R.R. Tolkien describing The One Ring, or a 15-year-old boy defending his individuality against Society (a.k.a. the target demographic of Hot Topic).

Watch Patel’s “studied reminder” in action (and also review the Apple Watch) below, via The Verge: