Ted Cruz Will Reprise His Debt Ceiling Brinksmanship, But This Time Just ‘Cuz 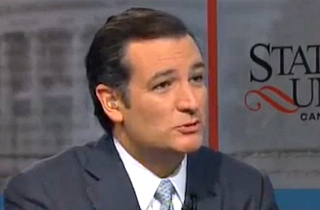 Senator Ted Cruz (R-TX) sighed yesterday that reporters just would not stop asking him about the government shutdown he engineered last October. It was four months ago, he cried. Why’s everybody still going on about it?

Could have something to do with this:

Cruz, the Texas Republican who led the fight to defund Obamacare that contributed to a 16-day partial government shutdown in October, said today he wouldn’t give in to Democratic demands to raise the debt limit without conditions.

“We should not raise the debt ceiling without significant structural reforms that address the out of control spending and out of control debt in Washington,” Cruz said at a Bloomberg Government breakfast. “The debt ceiling is the natural lever point to address the out-of-control spending and debt. It has historically been the most effective lever point to doing so.”

If that all sounds familiar, here’s what he said to CNN’s Candy Crowley during the first week of the government shutdown:

“Number one, we should look for some significant structural plan to reduce government spending…The debt ceiling historically has been among the best leverage that Congress has to rein in the executive…So the president’s demand, jack up the country’s credit card with no limits and no constraints, is not a reasonable one.”

The language is identical. All that changed is Cruz’s previous brinksmanship was predicated on the urgency of stopping Obamacare; this time his demands appear to be garden variety spending cuts, not induced by any event, made solely for the sake of making demands.

Alas, way back “four months ago,” House Speaker John Boehner (R-OH) was a defeated man helpless against his caucus. That is no longer the case. Meanwhile, the freshman senator burned through his political capital and is now openly laughed at during interviews, repeatedly, and by random crowds.

Cruz is likely blowing smoke. But as to why everybody is asking him about something that happened four months ago, the answer is that he’s talking as if it’s four months ago.