Ted Nugent: ‘I Honor Blacks’ While Obama And Democrats ‘Engineer The Destruction Of Black America’

Ted Nugent: ‘I Honor Blacks’ While Obama And Democrats ‘Engineer The Destruction Of Black America’ 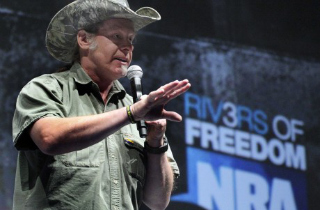 In his latest WorldNetDaily column, conservative rocker and gun enthusiast Ted Nugent asserted that “I honor blacks” while President Obama and the Democratic Party are engineering the destruction of black America.

In honor of February’s Black History Month, Nugent took to describing how, despite receiving 93-percent of the black vote, President Obama is “the clear and present engineer of the destruction of black America.”

“The economic and social policies he endorses are destroying what is left of a once proud and strong black America,” he explained. “As a MotorCity Motown guy whose gravity-defying career pivots on my intense adulation for my black musical heroes, it pains me deeply to witness this self-inflicted destructo derby. The destruction of blacks has been engineered by President Obama’s party for at least the last 50 years.”

Nugent cites several statistics as his proof that black America has been harmed by the left’s social welfare policies: the disparity between black and white unemployment rates; high dropout rates among black Americans in certain inner-cities; an “epidemic” of black-on-black crime in Democratic-controlled cities with “gun free zones”; and a large amount of black children raised in single-parent households.

“With all this unbelievable negative information, what is more unbelievable is that black Americans continue to support Democratic politicians who have raped and plundered black America forever,” Nugent wrote, adding that blacks seem to be the only ones unaware of how the Democrats have “engineered” the destruction of “black America.”

“I don’t celebrate Black History Month. I celebrate it every day, as my very black-inspired musical dreams could not have been successful were it not for black Americans,” the musician added, citing Bo Diddly, James Brown, BB King, and others as some of his biggest influences in life and music.