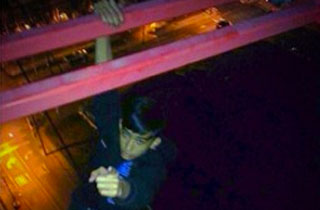 As authorities continue to investigate how a sixteen-year-old “daredevil” managed to sneak into the Freedom Tower earlier this week and make his way to the top floors, the New York Post claims they know how he pulled it off: according to their sources, 1WTC — the tower built over the ruins of the former World Trade Center — “doesn’t have a single working surveillance camera inside.”

For two hours on Monday night, Weehauken teenger Justin Casquejo ran “hog-wild” along the top of the high-profile terror target, even climbing to the top of the unfinished building at one point, until he was caught by a construction worker. However, the Post reports that there is no actual surveillance footage of his climb at all. In fact, their unnamed source claims that the surveillance system “won’t be operational until the building opens later this year.”

A construction worker on-site confirmed the lack of a security system in the building: “This place has a big bull’s-eye on it, and I don’t even want to think what could have happened if it was somebody with bad intentions.”

Adding to the damning evidence is the ease of Casquejo’s trespassing: the teenagers who helped Casquejo plan the stunt told the Post that they cased the World Trade Center a grand total of three (3) times. “We all knew he was going to get in,” Trevor Gidden said. “We planned everything.”

The building’s architects have claimed in the past that One World Trade Center will be “terror-proof” . This recent revelation is very assuring.