Oops: That Donald Trump Paris Gun Control Tweet Was From Back in January

A Donald Trump tweet about Paris got picked up tonight and condemned for its seeming callousness in the wake of tonight’s attacks, but this particular tweet was from back in January:

Isn’t it interesting that the tragedy in Paris took place in one of the toughest gun control countries in the world?

For whatever reason, Trump’s tweet in the wake of the Charlie Hebdo attack at the top of the year is getting newfound attention tonight and confused by some as Trump’s thoughts on tonight’s attack.

It likely got so much attention because of a tweet directed at Trump in response to the January one by the French ambassador to the United States: 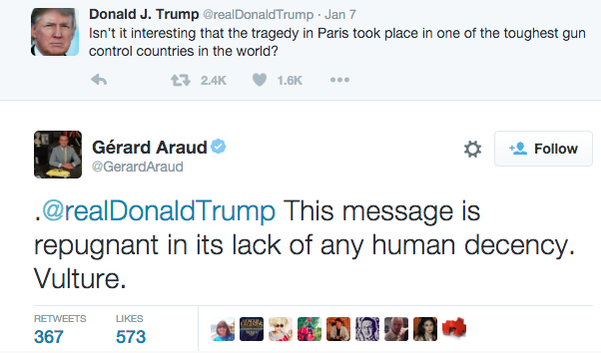 The tweet has since been deleted (presumably he realized it was from ten months ago), but the Trump tweet is still making waves as if it was sent out today:

Out of 100,000 sperm, you were the fastest? THAT'S INTERESTING, TRUMP #Paris https://t.co/gPRrxOWdQu

Dozens dead in Paris and Donald Trump wants to score political points about gun control and the right to bear arms. Un-f***ing-believable

Oh no, a vile gibbering and repellent moron has taken over your Twitter account! Hacking control laws needed. https://t.co/YCE24Skbcm

Dickhead Donald Trump backtracks and deletes offensive Paris gun control tweet, replacing it with stock "our prayers are with…"

.@realDonaldTrump This is a change from your first tweet, which you've deleted, where you blamed Paris gun laws. pic.twitter.com/1TMtgfd6Ow

Racist #DonaldTrump @realDonaldTrump 's comments on guns today were digusting. He must NEVER be president or veep.

For the record, this is what Trump tweeted tonight about the terrorist attacks:

My prayers are with the victims and hostages in the horrible Paris attacks. May God be with you all.