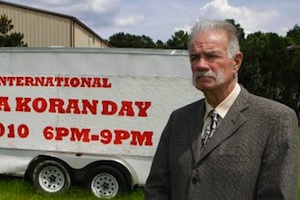 Hey, remember Terry Jones? I’m talking about the Florida pastor who took the news cycle hostage last summer by threatening to burn some holy books, an event which could have seriously hurt relations with the Muslim world as well as caused giant wild fires if the sparks managed to spread to Jones’ moustache. Anyway, Jones had plans to take a trip to England to go to a rally decrying the expansion of Muslim mosques. Unfortunately for him, the British government ran up, snatched away his tickets, and said, “Dude, you have no trip to England!”

“A Home Office spokesman said: ‘The government opposes extremism in all its forms which is why we have excluded pastor Terry Jones from the UK.

‘Numerous comments made by Pastor Jones are evidence of his unacceptable behaviour. Coming to the UK is a privilege, not a right, and we are not willing to allow entry to those whose presence is not conducive to the public good.’

‘The use of exclusion powers is very serious and no decision is taken lightly or as a method of stopping open debate.'”

Perhaps England just realized they already had a Terry Jones and theirs was much better.

Obviously, Jones was very disappointed. He told Sky News that he hoped the ban would be lifted. Poor guy. It must be a real bummer having someone not allow you to go where you want. Especially when were you want to go is to a rally to alk about how you want to stop Muslims from being allowed to go where they want.

Anyway, as that last quote from the Home Office implies, some will definitely see this as a bad thing, a kind of geographical censorship that keeps Jones from being allowed to spread his message and debate the issues. Others will also see this as a bad thing but for quite a different reason. They’ll just realize that we in America are now stuck with the guy.