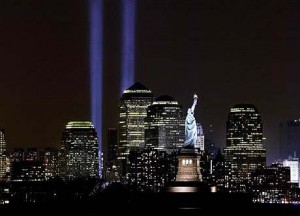 On every September 11th since 2002, the Municipal Art Society has lit up the skies with two beautiful beams of light in remembrance of the fallen World Trade Center Towers. While the “Tribute of Light” is wonderful to behold, Animal Planet is reporting that it also has a bit of a downside. This year, 10,000 birds were caught in the lights and forced to endlessly fly around in circles, horribly confused and having “crucial fat stores” depleted.

Fortunately, the New York City Audobon society has been working with the Municipal Art Society to help free the stunned birds. From Animal Planet:

“‘We have a protocol in place in partnership with the Municipal Arts Society in case something happens like it did on Saturday night,’ explains John Rowden, Citizen Science Manager for NYC Audubon. ‘There were huge numbers of birds flying through and large numbers did have difficulty navigating out of the beams. Through the course of the night we shut the lights off five times for approximately 20 minutes each time, which allowed the birds to clear out (and then new birds moving through would accumulate). The Municipal Arts Society were very supportive of our goals of minimizing risk to migratory birds.’ A similar situation happened in 2004 but because of the ways birds navigate the skies, and the way local weather affects their migration routes, these large numbers of migratory birds do not always pass through NYC on September 11th.”

Still though, the needless circling empties out the birds’ energy and could put a hurt on the seasonal migration they were participating in. Presumably, this will also make them late for their scheduled appearance at Glenn Beck’s next rally.