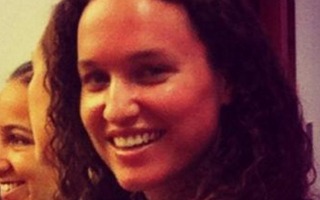 Megan Phelps-Roper was once the de facto spokesperson for the professionally offensive Westboro Baptist Church. She became the face of the church – speaking to media and frequently interacting with supporters and opponents alike on social media outlets like Twitter. Then, in November, she disappeared. Phelps-Roper recently reappeared in Brooklyn where she revealed to a reporter that, while she still loves her family, she has abandoned the church. Today, she has tentatively embraced, with childlike fascination, those people and experiences that were prohibited in her former life.

In a fascinating profile of Phelps-Roper by Fast Company editor Jeff Chu, the former true believer and spokesperson for the WBC explains that she still loves her family dearly but, after a crisis of faith, she and her sister left the church.

She started to question another Westboro sign, “Fags can’t repent.” “It seemed misleading and dishonest. Anybody can repent if God gives them repentance, according to the church. But this one thing—it gives the impression that homosexuality is an unforgivable sin,” she says. “It didn’t make sense. It seemed a wrong message for us to be sending. It’s like saying, ‘You’re doomed! Bye!’ and gives no hope for salvation.”

The crisis expanded when Phelps-Roper took a trip to a local library in Lawrence, Kansas, where she started to read some of the centuries of accumulated philosophical and theological knowledge.

“The idea that only WBC had the right answer seemed crazy,” Phelps-Roper told Chu. “It just seemed impossible.”

Chu recently caught up with Megan Phelps-Roper in Park Slope, Brooklyn, where she is experimenting with sushi and the Protestant sermons of that New York City borough’s Old First Reform Church.

“I definitely regret hurting people,” Phelps-Roper said. “That was never our intention. We thought we were doing good. We thought it was the only way to do good. And that’s what I’ve always wanted.”

“I think I’ve known that for a long time, and I would talk to people about how I knew the message was hurtful,” she added.

“Thank God for second chances,” Chu concludes. After more than 160 days off of Twitter, Megan Phelps-Roper returned on Wednesday night. “Hi,” was all she wrote, along with a link to Chu’s profile.