The Cain Scrutiny: Herman Cain’s Prior Opposition To National Sales Tax Not At Odds With 9-9-9 Plan

The Cain Scrutiny: Herman Cain’s Prior Opposition To National Sales Tax Not At Odds With 9-9-9 Plan 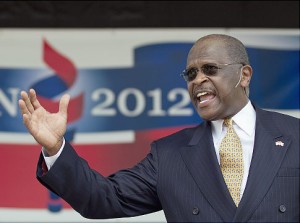 With Herman Cain‘s new role as GOP frontrunner comes the inevitable Cain Scrutiny (apologies to Dave Weigel), and while there are many legitimate grounds upon which to criticize the upstart pizza magnate, the idea that he was arguing against himself with his months-ago opposition to a national sales tax is baseless. Business Insider cites a Cain-penned November, 2010 op-ed in The Daily Caller to suggest that the candidate is at odds with his own 9-9-9 plan, but even a casual reading of Cain’s piece belies that.

Newly-minted GOP front-runner Herman Cain is best known for his 9-9-9 tax plan, but it turns out he opposed a key component of it — a national sales tax — less than a year ago.

In a column posted on the websites of a number of conservative publications, including The Daily Caller, Cain wrote that “the worst idea is a proposed national sales tax, which is a disguised VAT (value added tax) on top of everything we already pay in federal taxes.”

Miller goes on to publish responses from the Cain campaign that indicate the candidate’s consistent support for “fair/flat” taxes, and that he was referencing a national sales tax in addition to our current tax code,  but he needn’t have gone to the trouble. Cain was anchovy-and-onion explicit about that in the very same op-ed piece, including the portion that Miller blockquoted: (emphasis mine)

The worst idea is a proposed national sales tax, which is a disguised VAT (value added tax) on top of everything we already pay in federal taxes.

…A national retail sales tax on top of all the confusing and unfair taxes we have today is insane!

…The third reason the national retail sales tax on top of all the taxes we already pay is a bad idea, is that there is already proposed legislation that replaces all of the federal taxes we pay. It replaces all current revenue. It supercharges our national economic growth, and puts the power of taxation back into the hands of the people who spend their money.

It’s called the Fair Tax. It’s as easy to understand as ABC!

Miller is correct in pointing out that one of the arguments that Cain used against the VAT, that it gives the government a brand-new slippery slope of tax revenue, is currently being deployed by his opponents.

There are, of course, huge problems with the 9-9-9 plan (it strongly resembles a tax plan from a videogame, it’s the work of dyslexic Satan, it shifts the tax burden onto the poor, it encourages the purchase of used milk), and it has as much chance of passing Congress as a monetary system based on unicorn farts, but it isn’t contradicted by Cain’s op-ed from November.

Only time will tell how Herman Cain stands up under the glare of the frontrunner’s spotlight, and there are many legitimate criticisms to be made of the candidate’s steady stream of wild-and-crazy policy pronouncements (although I must confess that my own comically liberal reaction to Cain’s electrified border fence remarks was to think to myself, “Shouldn’t that ‘THIS WILL KILL YOU’ sign be bilingual?”). There’s no reason to create them out of thin air.