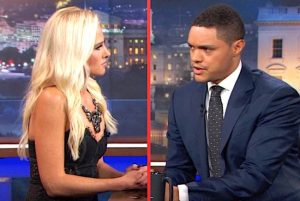 It was, without a doubt, one of the most highly-anticipated interviews in Trevor Noah‘s young career as host of The Daily Show: a lengthly sit down with conservative provocateur Tomi Lahren of The Blaze, whose viral takedowns of liberal talking points were significant contributions to the digital landscape of 2016.

From the start of the interview, it was abundantly clear Lahren had the chips stacked against her. Her introduction onto the show’s set was met with markedly mixed reactions, going as far as to evoke some audible boos before she even uttered a single word. As she joked when she sat down, “I’m in the lion’s den,” and there’s no denying she was correct: there is, at least in my experience, no singularly more unapologetically liberal gathering of people than a late night comedy show taping in New York City. Any conservative talking head faces an uphill challenge in this setting, even Bill O’Reilly or Ann Coulter (Megyn Kelly has finally earned crossover appeal, unlikely to draw jeers from even a liberal bastion like Manhattan.)

But for Lahren — the 24-year-old firebrand who has controversially taken on every imaginable topic in the last year — she was unlikely to “win” the showdown regardless of what she said. Here’s a rundown of some of the topics covered in the 26+ minute extended interview, and who scored points in the one-on-one showdown.

TRUMP’S VICTORY AND THE “FLYOVER” STATES
Lahren spoke about the “entire segment of Americans that are ignored,” identifying that in states like her native South Dakota the media has been disastrously out of touch. These are, by her assertions, “states that felt ignored by the coasts, by the mainstream media.”

In this segment of the interview, Lahren hit on all of the most salient points that spelled trouble for Hillary Clinton and the Democrats: the system needed to be shaken up by an outsider. She even made a crucial often-overlooked distinction that Jon Stewart himself once made: Trump’s victory is as much a repudiation against Republicans and it is Democrats. “Donald Trump is coming in from the outside,” she told Noah, “shaking up everyone.”

Lahren also earned points by arguing that despite the fact that Kellyanne Conway is the first woman in American history to run a victorious presidential campaign, she is not recognized as smashing any sort of glass ceiling for her own simply because of her boss. Trevor Noah even earned applause from his sympathetic audience by arguing as much. Tomi Lahren got the win in this round.

BLACK LIVES MATTER
“In terms of Black Lives Matter…” Noah began, indicating the very first of what would be a series of jumps from pre-planned controversial topic to topic. “What is your biggest issue with Black Lives Matter?”

Here, Lahren didn’t really stand much of a chance, though the 24-year-old certainly gave it her best stubborn effort. “The moment they started pushing ‘Hands Up Don’t Shoot’ — which is a false narrative,” the group lost her respect, she told Noah.

That, on the surface is not a bad argument; but she loses outright when she supports her assertion by saying the faction of BLM protestors responsible for, in her words, the “Fry ’em like bacon, F— the police” rhetoric represent the totality of the activist rhetoric. This is one of the easiest arguments to shoot down in a debate, and Noah did it perfectly.

“These are a few people,” he argued, indicating that the actions of a fringe few do not stand for the full group, the same way racist law enforcement officials do not stand for all Blue Lives or they work they do. However, his response seemed “scripted,” to a point to me, indicating he knew at some point he would tee up the topic just to drive up the score. Still, it was effective.

Not that Lahren didn’t come armed with her own statistics to hit him with. “Did you know that a black man is 18.5 times more likely to shoot a police officer than a police officer is to shoot a black man?” She leaves out a key word here however in her response: “unarmed.” As per the Washington Post from earlier this year, “An officer’s chance of getting killed by a black person is 0.000033, which is 18.5 times the chance of an unarmed black person getting killed by a cop.”

Trevor Noah easily wins this round.

MAINSTREAM MEDIA
“Let’s move on to the mainstream media…” Noah prompted again; Lahren walked into the trap she set for herself just minutes earlier however, conveniently now arguing that the “alt-right” doesn’t represent Trump supporters as a whole. They went back and forth about whether Lahren’s online viewership — which regular eclipses tens of millions of views — puts her in the category of “mainstream media.”

The audience mocked her when she said, “It’s mainstream in that it’s being watched, but it’s not mainstream in classification.” However, I found this to be one of her best one-liners of the whole interview, because it’s absolutely right; she’s popular, and deservedly so. But her rhetoric, stances, hot takes, and opinions would never permeate the newsrooms or editorial efforts of CBS, ABC, CNN, MSNBC, perhaps at times even being too fringe for Fox News in my opinion. On this brief topic, Lahren and Noah draw evenly.

ARE YOU MISUNDERSTOOD?
Trevor Noah asked a very fair question from the height of his intelligence that I had hoped he would present to the controversial Lahren: “What would you wish people would understand about you?”

Her opening response would have made for a wonderful button to end the interview.

“I wish that we could disagree with each other without thinking that we are bad people or ill-intentioned folks,” she replied cooly. “It doesn’t make me a bad person or a racist” to criticize Black Lives Matter, she continued. “True diversity is diversity of thought.”

…a very cogent and well-presented argument. And then, as she would do frequently in the interview, she got in her own way, taking it one step too far with her very next line: “I don’t see color.”

“So, what do you do at a traffic light?” he joked, eliciting wild applause from the crowd and even a hint of a smirk from the guest herself. She put her foot in her mouth with that one utterance, so Noah takes the lead with the “win” here.

COLIN KAEPERNICK
As soon as I realized that the entire interview was essentially going to consist of Noah cherry-picking topics that he knew would be difficult for her to respond to, I waited patiently for Colin Kaepernick’s name to be invoked. After all, one of Lahren’s most divisive takedowns of the last year was her harsh rhetoric for the 49ers quarterback who shook our culture simply by kneeling during the National Anthem.

Here Lahren waltzed right into a brick wall, like so many conservatives before her who criticized the protest. Noah hit her with the $64,000 question. “What is the right way for a black person to get attention in America” if not by protesting or marching?

“Why would you take out your perceived oppression of black people on our national anthem and flag?” she asked to audible gasps from the The Daily Show crowd. She admitted our nations history has “got it’s scars, it’s got its wounds,” but noted it was entirely inappropriate for Kaepernick to act in that regard.

“I asked you one question,” Noah said. “How should a black person bring up their grievances?” It would take him several attempts to pin her for a response — which, when it finally came, was weak — making it the most cringeworthy part of the interview. Noah buried her in the process, and takes the Win here.

IMMIGRATION/OHIO STATE ATTACK
But when it came to immigration, Tomi Lahren scored some unexpected late points, even debating the topic against the South African-born Noah.

“You should respect the nation that has brought you in so graciously, I do believe that. I do believe it’s a privilege to live in the United States,” she argued, echoing a popular sentiment held by millions of conservatives and liberals alike. The crux of the argument here hinged on illegal immigration versus a proper path to citizenship. Lahren highlighted we are a nation of laws; considerations of granting amnesty to people who are here illegally spit in the face of those who wish to come to the United States through the proper channels. It comes down to respect for our laws and our way of life, she argued.

Lahren turned the tables to question Noah about the need for sovereign nation’s to have borders. Sheepishly, he settled on, “There’s some who did it one way and some who did it another way,” rather than answer Lahren’s questioning directly. On this topic, she earned a late win.

FINAL VERDICT
Trevor Noah to his credit delivered his hits in a consistently calm and measured tone. He didn’t hit her with the same level of bravado-driven angst that Jon Stewart famously gutted Jim Cramer with in 2009 (“It’s not a fucking game!”) but rather allowed her, at times, to meander into her own traps.

Tomi Lahren defeated herself in this interview, and Trevor Noah was the “winner” here… barely. Home field advantage certainly played a role, just as The Daily Show did consistently for Jon Stewart when he welcomed adversaries to the 11th Avenue studio in New York City for years.

For the sake of transparency, I have friends who work for The Daily Show staff of writers and producers; I even attended a taping live in person once. I appreciate Noah’s tenure, and have been less critical of his turn than most. But to me, I could not shake the thought that Noah’s pointed questions seemed backed by not only the entire energy of the audience but also the writing staff and anyone associated with the show (I would estimate that north of 90% of late night comedy staffers are liberal). It is as if the full staff got together, pooled their collective grievances against Tomi Lahren, and Noah served as the sole delivery man for all those criticisms (I have no knowledge of the production process for preparing for the interview, just writing from my gut). And on the other side of the onslaught was one 24-year-old woman, someone who proved that she is going to be a dominant force in conservative media for a very long time. I’m left wondering why Tomi Lahren was asked to be a guest on the show at all; she doesn’t have a book to promote, nor doing any big interviews to plug on the side. The full interview was framed around disproving this controversial millennial with an increasingly influential voice.

But regardless, Trevor Noah gets the win; I hope it’s not the last time we see the two do battle.