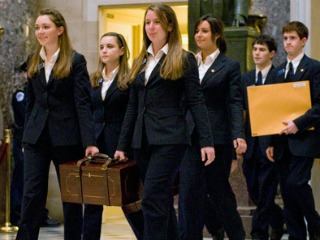 It’s hard out there for a page. Today, House Speaker John Boehner and House Minority Leader Nancy Pelosi issued a statement announcing that the House of Representatives’ page program would be coming to an end because, essentially, technology has rendered the need for pages obsolete. You may choose to read this as “email had made it so that kids don’t have to trip over their loafers to deliver manila envelops containing games of tic tac toe played between Boehner and Pelosi” or “coldly calculating robots are steadily pushing insufferable, acne-ridden politics nerds down the evolutionary chain until they become extinct:”

We have great appreciation for the unique role that Pages have played in the history and traditions of the House of Representatives. This decision was not easy, but it is necessary due to the prohibitive cost of the program and advances in technology that have rendered most Page-provided services no longer essential to the smooth functioning of the House.

Although the traditional mission of the Page Program has diminished, we will work with Members of the House to carry on the tradition of engaging young people in the work of the Congress.

Maybe all that money is needed because there’s just something about dangling ambitious young people in front of morally corrupt politicians like so much catnip before a flatulent and impotent old tomcat that renders things… complicated? Roll Call reminds us that, sometimes, people with power do icky things and people with youth do stupid things:

In 2006, Rep. Mark Foley (R-Fla.) resigned after it was revealed that he had sent lewd Internet and text messages to pages. In 1983, ex.-Reps. Dan Crane (R-Ill.) and Gerry Studds (D-Mass.) were reprimanded for engaging in sexual conduct with teenage pages.

There have also been numerous instances in which pages were caught drinking alcohol or using other substances.

Instances of inappropriate sexting and cuddling are expected to drop 20 – 60 percent now that human pages have been replaced with those aforementioned robots. The silver lining is that, although job prospects continue to be mostly abysmal, bright-eyed young things can still learn to become corrupt, conniving, selfish adults with the one sector still desperately seeking job applicants: Reality television.