As has been widely reported, Missouri police arrested 19-year-old computer science major Hunter M. Park Wednesday morning for making terrorist threats on social media against the University of Missouri. Police have not said which posts Park made, but CNN pegged two likely contenders: “I’m going to stand my ground tomorrow and shoot every black person I see,” one threat read. “Some of you are alright. Don’t go to campus tomorrow,” said another.

Oddly enough though, when screenshots of that second threat were posted online, it had a positive score, indicating more people liked it than disliked it. 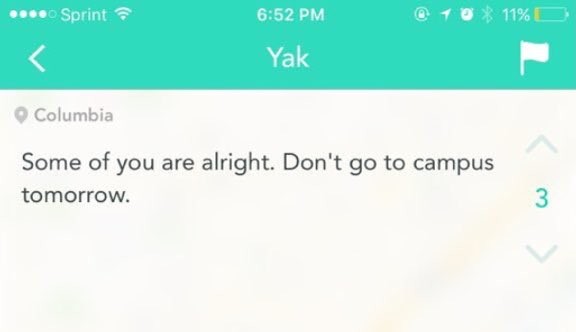 Were students at Mizzou really happy about someone threatening to kill them? Probably not; it seems more likely that the post was an Internet inside joke that a few student understood, but many didn’t.

The night before the October Umpqua Community College shooting in Oregon, someone posted on 4chan saying “Some of you guys are alright. Don’t go to school tomorrow if you live in the northwest.” The media picked up the post and spread it even further, while the FBI began investigating to see whether or not the thread was actually connected to the shooting.

In true 4chan irreverent fashion, the site embraced the negative media coverage and adopted the situation as one of its many running jokes. The website KnowYourMeme notes several versions of the joke, all of which farcically tell people to avoid historical and fictional massacres. 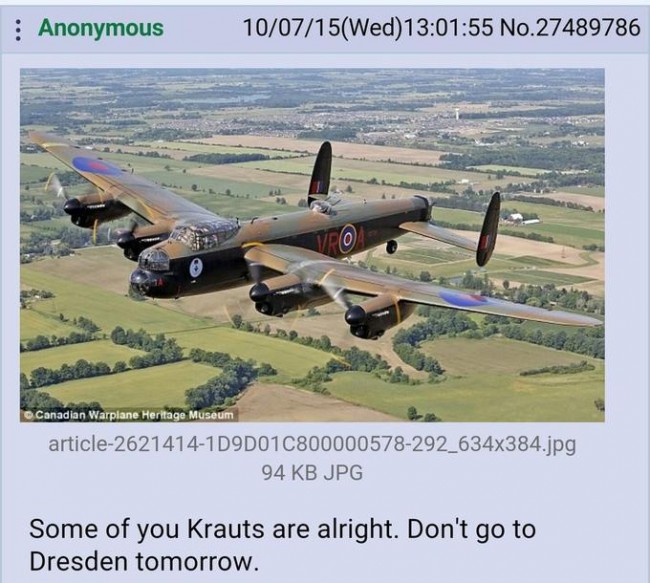 Offensive? Yes. Funny? That depends on your tastes I suppose (I quite liked the Star Wars one). Again, people upvoted the YikYak joke, so someone found it funny.

As for the other comment about “standing my ground” and shooting every black person, that sounds a lot like a reference to “stand-your-ground” laws. But stand-your-ground proponents typically don’t see the law in racial terms, it’s their opponents who do. Read in that light, the comment sounds less like an actual threat and more like a dark commentary on the purpose of the law.

Again, is it a particularly good joke? No, it’s godawful, and it’s certainly easy to see why people would feel threatened. But it isn’t that far off from, say, South Park‘s take, where “stand-your-ground” laws allow Cartman to shoot black people with impunity.

Of course, all of this might not matter. It’s a matter of debate in the legal community whether or not online threats need to have been actually intended to be threats, or whether it’s only necessary that a reasonable person would have viewed it as a threat. Proponents of the former say their stance would prevent guilty men from just saying they were joking, while proponents of the latter say it would prevent putting men in jail for threats they never actually meant to make. When the Supreme Court took up the question earlier this year, they ruled on procedural grounds and avoided the central issue.

So yes, even if Park was just joking, he could still find himself in prison. In 2013 for example, 18-year-old Justin Carter said during an online game, “I’m f- – – – – in the head alright, I think I’ma SHOOT UP A KINDERGARTEN AND WATCH THE BLOOD OF THE INNOCENT RAIN DOWN AND EAT THE BEATING HEART OF ONE OF THEM,” followed by “lol” and “jk.” Despite being obviously an over-the-top joke (albeit one in poor taste), Carter went to prison for five months until an anonymous stranger paid his $500,000 bail. He is still being prosecuted by the state of Texas for making a terroristic threat, and is legally barred from living at home with his underage siblings.

Could we be seeing Justin Carter 2.0? Hopefully the national media doesn’t stop covering this case once the Mizzou protest situation dies down, and seriously examines the tricky First Amendment issues at stake.