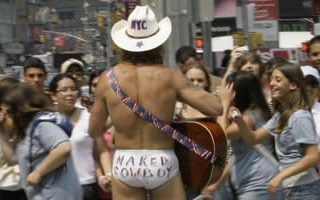 President Barack Obama may have a host of A-list celebrities and famous up-and-comers backing him, but the Democratic politician can’t say he has the support of New York City’s Naked Cowboy. GOP contender Mitt Romney, however, has won over well-known concrete jungle street performer, who waltzed through Times Square on Tuesday with the word “ROMNEY” on his tighty-whites.

“I believe in a small, decentralized, fiscally responsible federal government,” the Naked Cowboy, whose real name is Robert Burck, told CBS Local. ”I believe in an economy with free market principles, and I believe in the strongest national defense on earth. And those are the antithesis of all the things Obama is doing.”

Burck, who described himself to POLITICO as “definitely conservative by nature,” claims to have filed his vote for Romney in how home state, Ohio, where Obama is currently leading in the polls. He explained further to POLITICO:

“I believe in limited government, I am by nature an entrepreneur and a small businessman, and I’ve been very successful with that. All the things that are conservative, I am by nature. And I see this country as going kind of in the opposite direction of that.”

Burck stepped into the limelight several years ago when he began prancing around NYC in nothing but briefs, a cowboy hat, and cowboy boots with his guitar in hand. Earlier this year, he reportedly ran for president as a Tea Party candidate. In 1999, he ran for Mayor of New York City but pulled out partially because of the “amount of red tape involved.”