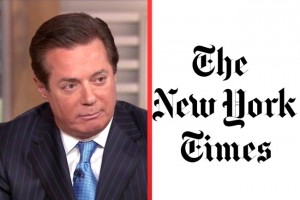 It has been widely accepted long ago that this is going to be remembered as the craziest presidential campaign in modern American history. This is, after all, a large part of why the news media gave Donald Trump about two billion dollars in free advertising during the primaries. Politics can be very boring. Boring makes work more difficult and less rewarding for the news media. Trump is not boring. Therefore, they effectively gave us Trump.

The latest insane chapter of this bizarre-world campaign has been written by The New York Times. They are reporting that Trump’s campaign manager Paul Manafort was possibly paid over $12 million in off the books cash by a corrupt, pro-Russian, Ukrainian government, whose president Manafort once worked for. In addition to being overtly scandalous, such payments would also appear to be illegal.

Given this, along with Trump’s complimenting of Vladimir Putin, his recent inaccurate comments about Russian involvement in the Ukraine, and the allegations of Russian hacking of the DNC email system, this is obviously a very serious matter. It would seem, at least on the surface, that there is no possible way for Manafort, or perhaps even the campaign itself, to survive this type of revelation.

After all, this story leaves at least the impression that Trump is, at best, a stooge to Russian interests, or, at least, in way over his head. Manafort, who has always given off the creepy vibe of a mafia don, will surely have to resign. Heck, his predecessor Corey Lewandowski actually tweeted out the story himself Sunday night!

You could almost hear the “old media” writing the Trump campaign’s official obituary due to the coming implosion that this story will surely cause. In their minds the revelation fits all of the critical criteria for such an event. It originated in “The Times,” so therefore the source has the proper stature and credibility to bring someone significant down. It is also a matter of great gravity and one that, if seen in the way the media will surely play it, politically toxic (could Trump be a “Manchurian Candidate”?!). Therefore, it has all the markings of a game-ender.

However, my initial, gut-level reaction to this Manafort story is that the impact of this will likely be minimal. The old rules of the media are still playing by just aren’t that relevant anymore, especially in this crazy election cycle. In fact, I think this story may be SO nuts, that it actually will limit its impact.

This whole thing just feels too much like it is out of bad action-adventure movie and is too far-fetched for the average person to really wrap their minds around. While Manafort is an inherently unlikeable character, he is not well known. Meanwhile, Trump, at least among that shrinking group voters who don’t already hate him, seems personally like the last guy who could be used by the enemy of the United States to promote their interests.

Since Trump has already gotten rid of one campaign manager fairly recently, he simply can’t afford to fire Manafort now, especially since things are going so poorly and there is so little time before the election. If he did fire Manafort, it would seal the narrative that his campaign is in disarray while also killing one of the central promises of his candidacy, which is that he will hire the very best people (a notion that highly unqualified Trump spokesperson Katrina Pierson should have single-handedly destroyed long ago).

So my guess is that Trump will simply blame the news media here, stick by Manafort, and pretend this is a non-issue. I also think that he will largely get away with such an audacious gambit. A report in “The Times” is unlikely to cost Trump even a single vote in a key state.

The rest of the liberal media which still effectively takes its orders from them won’t have much impact either, especially since Trump’s poll numbers are already so low that few “swing” voters who actually read newspapers are currently with him. The story is too complex and lacking in sex appeal for the television media to obsess over too much and, if they do, they will quickly move on when they realize there are no ratings to be gained (and Trump says something exciting/stupid).

In short, if Trump wants to (I never try to predict what Trump desires at any given moment because that can change with the wind), I believe he can ride this out, use it to fuel his campaign against the news media, and have this be basically a two-day hiccup (though look for Hillary to further increase the remarkably little media pressure on Trump to release his tax returns with implications that there could be something related to Russia that is making him afraid to do so).

In any other given presidential cycle, this story, if true, would indeed be the end of Manafort and probably the entire Trump campaign. But this being the strangest campaign we have ever seen, it’s only fitting that it won’t be. Trump is going to lose and maybe he eventually will “implode,” but I don’t think it will be this week, or directly because of this report.
—
John Ziegler is a nationally-syndicated radio talk show host and documentary filmmaker. You can follow him on Twitter at @ZigManFreud or email him at johnz@mediaite.com