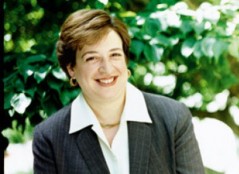 Reading the New York Times is sometimes a bit like talking to your grandmother. Their attention to language, while mostly reassuring in this day and age of emoticons, sometimes feels like a throwback to a time when people handwrote thank-you letters. When even the President of the United States is declaring on network TV that he is going to “kick some ass” probably the Times could learn to employ at least some asterisks in lieu of the sort of (patronizing) the rhetorical kids gloves used in the Elena Kagan email story from this weekend.

Some background: A slew of Kagan’s emails from her years in the Clinton White House were released Friday, offering a glimpse into the thinking of a woman whom certain people worry has a too-short judicial record. Plenty of interesting things to be found in the emails, but here’s how the Times covered some aspects of Kagan’s language:

Her writing could be earthy, with at least three messages using variations on the two most common swear words.

In one, she responded to a message with a single word, weaving one of them into “unbelievable.” In another, she said her staff should not take on empty tasks. “You should go,” she said, “but don’t volunteer us for the” scutwork — though she substituted an epithet for the first part of that last word.

Do you get what she actually said? Shocking stuff. It’s sort of like the Times version of Wheel of Fortune. Let’s just hope the Times is never tasked with reporting on Rahm Emanuel‘s emails.