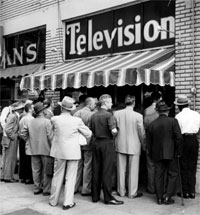 If you are reading this post you are probably aware that after President Obama‘s Oval Office address last week just about every pundit and anchor on MSNBC did a 180* and turned on the president. Headline news! Foreshadowing certain doom for the Dems in November. Except did it matter? Probably not to the country at large. Or even the country at medium.

Turns out that in much the same way many people (ahem) don’t know who’s winning at baseball until the World Series begins, the majority of the population is actually not paying attention to the daily ups and downs of the Obama administration. From yesterday’s Times:

Mr. Kaplan said that if the MSNBC commentator Keith Olbermann was upset by “what the Obama speech did or didn’t contain, then every person who is booking a guest or framing an article is affected by that.”

Short version: the cablesphere is talking to hear itself talk…and the public isn’t listening. Also, they don’t trust the press so much.

“Obama couldn’t get a break from any of the national commentators,” [Dennis Ryerson] said. “So I was surprised when I saw a poll today that showed that Obama’s approval rating didn’t change that much. I don’t know if anyone has figured out the impact of the new information order when you have so many opinions out there.”
[…]
But, [Martin Kaplan] added, “I think the impact of the various conventional wisdoms of Washington is far less, because people have so many places to turn to.”

Also complicating matters is the mistrust of the news media: it is at an all-time high. Many Americans are more likely to assume that anyone they read or see on television has a political bias.

Short version: No one in the Oval Office had a Cronkite moment after “losing” Keith Olbermann.