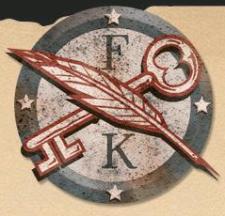 For part 4 of our 100-part review of The Overton Window, Glenn Beck‘s new thriller, we’re digging deep to reveal all the secrets. Not so much about the plot, but about the websites, Twitter feeds and more mentioned in the book – and how Beck and his team have prepped you for a scavenger hunt.

• Molly’s poster: Early in the book, Molly, one of the main characters, is putting up a poster regarding a tea party event in New York City later that night. We see the full list of speakers, and their affiliations. For one, there’s Beverly Emerson, the Director Emeritus of “Founder’s Keepers” – and also Molly’s mom. Her website is listed, and it is an active site. It happens to be a fairly comprehensive site that could be real, but very clearly was set up just for the book. There’s a blog (apparently the June 7 event was so successful “the bar ran out of Sam Adams”) and an area to give your information to contact the site (not sure what happens there). Also, a list of friends. On top – Bill O’Reilly and Glenn Beck. Also: Toby Keith. If you’re so inclined, you can follow the “fake” group on Twitter.

Also, there’s Maj. Gen. Francis N. Klein of the site GuardiansOfLiberty.com. This is an active site, that redirects to CampaignForLiberty.com – a real organization that looks to be big fans of Rep. Ron Paul. Another speaker, Earl Matthew Thomas, a (fake) former 1976 Presidential candidate libertarian, is apparently the author of Divided We Fall. Not sure if this is the reference, but there’s a political thriller with the same name.

• One of the main characters who plays a role in the second half of the book is Stuart Kearns, an FBI agent deep undercover as a…former FBI agent. He started a website that attracts anti-government activists as part of his job, and it’s called, wait for it, StuartKearns.com. Type that into your search box – and you’ll get redirected to the FBI site.

• At some point in the book, things happen, and Noah Gardner gets double-crossed. All his info is used against him – including his Twitter feed. No mention of what it is, but if you check out @NoahGardner, you’ll see what looks like an account set up for those who have read the book. Notable follows – The Rendon Group and, um, Star Wars (read the book, it makes sense).

• A classified memo makes an appearance early in the book (it takes up a few pages) titled, “Constitutionalists,” Extremism, the Militia Movement, and the Growing Threat of Domestic Terrorism. There’s a lot of dense info in here, some underlined for emphasis, and a whole lot of acronyms. Here’s one line: “Tax resisters/ “End the Fed” proponents / IRS/WTO/IMF / World Bank Protesters.” Get your Google out, people. But one part is particularly interesting, and it relates to a co-worker of Mr. Beck at Fox News – Oliver North. See, the memo mentions REX-84, and not in a positive way at all, and as Beck explains in the afterward, this is a real exercise. Read about it here.

There’s more, but as Beck writes, “If a passage or a statement in the book intrigued you but isn’t specifically mentioned here, take a minute and type some key words into your favorite search engine.” Homework!