The President’s China Trip Will Be Twittered, But Not By Obama

The President’s China Trip Will Be Twittered, But Not By Obama 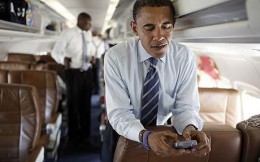 Amidst all the chatter about the upcoming Week of Palin, you may have noted that President Obama is part way through an important trip to Asia. The President, and the press corp. traveling with him, landed in China Sunday and are scheduled to depart Tuesday. Yesterday the President addressed a group of students about the importance of a free and unfettered Internet; the Chinese place strict rules on how much information is available online, and many sites we take for granted here are banned there, for example, Twitter, something the President has apparently never used:

Well, first of all, let me say that I have never used Twitter. My thumbs are too clumsy to type in things on the phone.

Really? Isn’t this the President who refused to turn over his Blackberry? Hmm. At any rate, the ban on Twitter is providing something of a challenge to the Twitter happy press corp, who over the past 24 hrs have been attempting to access the site through various means. This from today’s Playbook:

DESPERATE TIMES CALL FOR DESPERATE MEASURES – With Twitter blocked from our laptops here at the Shanghai filing center (Burton, don’t be getting any ideas), @JakeTapper is tweeting from his ‘Berry. @EdHenry found a workaround with TwitPic: ‘We’re fighting the power.’ @ChuckTodd figured out how to update through his PING.FM account. Chuck e-mails from the transmission pool next door: ‘i posted a ‘if you can see this update on twitter/facebook’ let me know… and got deluged with friendly acknowledgments. The revolution can still be twittered thanks to the ping dynasty!’ (Also blocked: bit.ly, which is why we’re using tinyurl as our URL shortener today.)

A number of member’s of the press corp have twittered out that they aren’t sure whether their tweets are getting through because they can’t access the site, says Time‘s Michael Scherer: “Twitter is blocked in China. I won’t know if anyone sees this message (sent from cell phone) until we get to South Korea.” However, it seems so far, so good. Below is a look at the tweets coming from the top Twitterers currently traveling with the President. (It updates every time the screen is refreshed.)