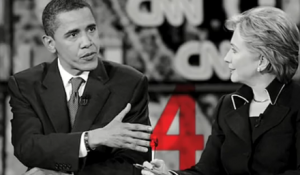 Inception? More like In-Suck-tion! Toy Story 3? More Like Toys Boring Me! No, none of the summer’s big hits so far have excited me because I’m only pumped for 14 Weeks, the most exciting movie ever made!

Wait, what’s that you say? 14 Weeks isn’t a real movie? It’s actually a ridiculously over dramatic fake trailer made by the Republican Governor’s Association that turns the midterm elections into a Jerry Bruckheimer production? Aw, bummer. I was already trying to reserve my tickets for the opening day midnight show.

One thing you can say for the nearly three-minute-long “trailer” is that production values are pretty darn impressive. The definition is super high and the music is all sorts of wonderful. The first half, the half that shows how evil monsters from the planet Liberal have invaded our country, ravaged our women, and enslaved our children, is set to that one scary stock music that kind of sounds like Carl Orff’s “O Fortuna” but isn’t*. The second half, the part that shows how a scrappy army of states’ rights-respecting misfits will band together to slay evil Queen Pelosilla the Dark is set to music so inspirational it brought a tear to my eye.

Really, the whole thing is amazing and totally not at all hyperbolic and lame. However, don’t you worry, Democratic film fans, Wonkette reminds us that the Democratic Governor’s Association produced their own little video just last week by compiling a bunch of tired movie quotes that work better as yearbook quotes and slapping them together.

There sure are a lot of film geeks running this country. I wonder if all these governors took time off last week to go to Comic Con and check out the new Tron trailer. Seriously though, these videos make it clear that the question isn’t who will reign supreme this November. Rather we should all be wondering whether or not the victory speeches will be shown in eye-popping 3D.

*Special, special thanks to the amazing Scott Smitelli for figuring out what that music was because it was absolutely driving me insane.